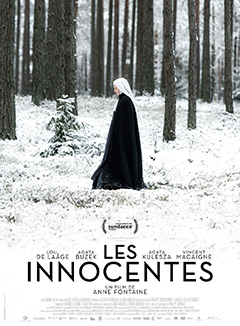 I’m generally not much of a fan of the Anne Fontaine movies I’ve been able to watch, so when I sat down to catch Les Innocentes –previously titled Agnus Dei, which is Latin for “Lamb of God,” which could be interpreted as “the innocents” and could also refer to the 1985 film Agnes of God, in which a nun is “miraculously” pregnant. However, do not get it confused with the 1961 horror film of the same name– I had preferred not having read anything about it.

The story, which the film indicates is inspired by events that happened, revolves around the life of a French Red Cross doctor, Mathilde (de Laâge), in 1945 Poland right after the Soviet Red Army had pushed out Nazi German forces from the country. One day, Mathilde is approached by Nun Maria (Buzek), who had sneaked away from the convent, against Mother Superior’s (Kulesza) advice, in search for help of an ailing nun who’s about to have a baby.

While the mood in The Innocents is drab, featuring an almost desaturated color palette of earthy colors in a blistering winter, Fontaine’s story ends with a glimmer of hope, which is usually rare in films that deal with the horrors of war that paint characters as either good or bad. De Laâge’s Mathilde is the rather wholesome heroine, who risks her own job and safety to care for the well-being of the residents of this convent. She’s gutsy, a free spirit and a good doctor, young and good-looking to boot; serving as a catalyst for everything that happens to the inhabitants of that doomed place stricken with what could be God’s “worst punishment.”

It is the nuns that unleash most of the dramatic scenes, but also give you the hints of life beyond the nunnery when Nun Maria shares with the newly-arrived doctor that she’d once enjoyed the company of men and was once coquettish with a mischievous glint, or the lively Nun Irena (Joanna Kulig), who actually revelas she’s probably the reason why their lives were all spared. However, the most important relationship is the one Buzek’s Maria has with Kulesza’s Mother Superior, whom she obeyed blindly. Kulesza’s stoic and, at times, grateful demeanor with Mathilde goes in stark contrast to Kulesza’s fun loving nature in Paweł Pawlikowski’s Ida— and I was actually quite excited to listen to her speaking Polish, some French and Russian. It’s her that’s the most conflicted character of the lot, having been convinced that she was doing the best out of that dire situation; looking out for her charges even if that meant dooming herself.

Overall, The Innocents is an engaging drama with some strong acting, that deals with a controversial subject matter without being actually polemical about it. It’s straightforward and leaves you with a certain sense of relief by the end, which is usually the opposite feeling of a majority of WWII-related stories.