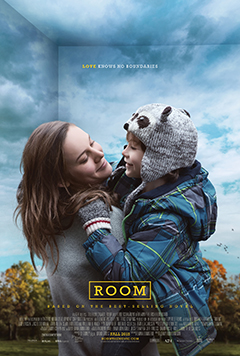 Let’s admit this- award season films have overwhelmingly been just ‘okay’ movies. Other than Fury Road or Inside Out, the highest placing movie is Spotlight, scratching the Top30 [at time of posting], while the rest float around just below the Top60, and some others don’t even dance around the Top100. Room, a Canadian-Ireland co-production, is one of the good ones that has maintained its place on the Top10 since the end of 2015.

Adapted by Emma Donoghue from her own novel, Room chronicles the lives of Jack (Tremblay) and Ma (Larson), a boy and his mother who have spent five years of their existence (in Jack’s case, his whole life) trapped in an equipped garden shed in the middle of who-knows-where, which is simply known as Room. In there, Ma has made sure that Jack leads as normal a life as possible, until they manage to reunite with Ma’s family.

The biggest strength in the film is that it’s not a horror survival tale nor a thrilling escape story, but a character study with great acting. Brie Larson, who is poised to take home a well-deserved Best Actress in the upcoming edition of the Academy Awards (after Golden Globes and Critics’ Choice wins, a Hollywood Reporter profile, ahead of a possible Screen Actors Guild win and a BAFTA showing), takes charge of the claustrophobic story as the cold-headed Ma, who somehow created this enclosed world that kept hers and her son’s sanity. It all begins to fall apart for her when she’s confronted with her father (Macy) at the dinner table, which also included her mother (Allen). It’s the best scene in the whole movie; though Macy later disappears to be never heard of again, the incident paints these characters as real people. As the mother that spent five years locked up in a “cell” with her son, and as a father whose daughter was taken away and violated, it’s a delicate situation for both.

The revelation of Room, however, is Jacob Tremblay, who is as much a lead actor as Larson was. So where is his Oscar nomination? If we all gave (applauded… and maybe danced to) Abigail Breslin’s Little Miss Sunshine role so much critical acclaim, where is Tremblay’s? The kid leads the second half of the film, after Ma suffers her emotional breakdown. The only fault of the project is that it’s difficult to explain the inner-workings of a character, so Jack’s easy-adjust seems a bit mechanical. If we see the ugly downward spiral of Ma’s depression after she leaves Room, it stops being a film about the triumph of the human spirit, though.

Overall, it’s gripping and emotional drama, which we haven’t seen much this year.