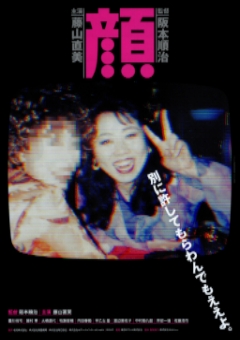 I’m not sure whether the great Japanese new wave director Imamura Shôhei ever saw this independent film—or even heard about it, for that matter—but it is safe to say that he would have been amused if he did. Directed by the prolific and versatile Sakamoto Junji, a one-time assistant to Ishii Sôgo who burst onto the scene the same year as the now highly regarded Kitano Takeshi and Tsukamoto Shin’ya, Face (Kao) has as its protagonist the kind of woman who would have felt at home with Imamura—and vice versa.

If her almost terrifying innocence and social awkwardness, not to mention her body type, bring to mind Harukawa Masumi’s Sadako from Intentions of Murder, then the ruthlessness she projects under duress recalls the likes of Hidari Sachiko’s Tomé from The Insect Woman and Watanabe Misako’s Shima from Endless Desire (Watanabe, incidentally, has a brief role here as the mother of this character), among others. And she is as enigmatic and indomitable as any of them.

When initially encountered, thirty-something Masako (Fujiyama) is a frumpy homebody toiling away at the family’s fading dry-cleaning business in Tokyo run by her mother from their shophouse. Her only form of escape is a bizarre, child-like daydream, strikingly realized by Sakamoto with a touch of the surreal. While she is treated sympathetically by her mother, her haughty younger sister (Makise) never wastes an opportunity to emotionally abuse this large-bodied, seemingly dimwitted woman. Things come to a boil after the mother’s death when a distraught Misako becomes aware of her sister’s plans.

After committing a heinous crime, which surprisingly ends up having a liberating effect on this previously withdrawn and miserable individual, Masako embarks on a darkly comic journey across provincial Japan. She finds a way to avoid the law both through sheer luck (her mildly retarded demeanor turns out to be helpful) and, to her own surprise, personal resourcefulness. During this ordeal, she manages to fulfill many of her longtime goals, including learning cycling and swimming, which prove to be helpful in her flight.

Like Imamura, Sakamoto neither judges nor makes a victim of his protagonist, choosing instead to simply observe this fascinating creature, brilliantly essayed by Fujiyama, who is best known for her theater work. Although the plotting at times leaves something to be desired, the various episodes add up to a pretty accurate depiction of contemporary Japanese society, where social exclusion and gender inequality remain prominent issues. But above all, Face is one of the more remarkable and complex female portraits Japanese cinema has produced in the recent past.