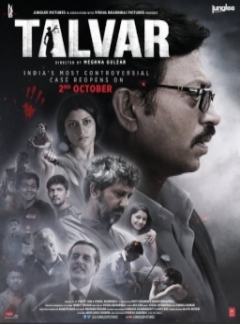 “People sometimes forget the sword’s there,” an investigating officer is told metaphorically by his superior halfway through the taut and compelling thriller Talvar. “And in the past 60 years [the period since India’s independence], it’s become rusty.” He is referring to the saber—the “talwar“, which is also transliterated as the titular “talvar“—carried by the blindfolded statue of Lady Justice, representing punishment [1]. Not coincidentally, the original title also echoes the surname of the dentist couple, Rajesh and Nupur Talwar, who were accused and eventually found guilty of murdering their 14-year-old daughter and 45-year-old domestic help in 2008 in Noida, India, a case which generated extensive media coverage and public interest due to the social class to which they belonged and the suggestions of sexual transgressions that involved all parties. In November 2013, the parents were sentenced to life imprisonment [1].

In this well-wrought, thinly veiled account of the case, director Meghna Gulzar, daughter of the great multi-talented artist simply known as Gulzar, employs the “Rashomon effect” (named after Kurosawa Akira’s 1950 film) to illustrate the subjective nature of perceived reality by depicting three different versions of the incident: those of the cops’, the (Central Department of Investigation) CDIs’ and the parents’. While the filmmakers don’t shy away from touching on some of the issues consequently brought forth regarding the Talwars and their upwardly mobile society, they are generally sympathetic to their plight. Therefore, in the end, the film is less an examination of middle-class values than a critique of institutional myopia and tabloid journalism, recalling, among other movies, David Fincher’s recent Zodiac and Gone Girl.

It opens with a lengthy flashback in which the parents (Kabi and Sen Sharma—both very good) become victims of police incompetence and corruption, especially after the servant, who was initially believed to be the culprit due to his absence, is found dead in the same housing complex. Once the CDI steps in, the duo finally get a sympathetic ear for their version of the events.  Some of the other suspects, however, are less fortunate, as CDI, similarly feeling the heat from above, also employs strong-arm tactics to reach its own conclusions. The case is eventually passed on to another team of experts who end up backing the police’s account of the incident.

Working in a more animated register than usual, Irrfan Khan is magnificent as the reluctant CDI officer who is initially called upon to handle the botched case. Although the nature of his personal involvement in the inquiry is less than fully realized by the director and writer-producer Vishal Bhardwaj, the screenplay otherwise is as sharp as A. Sreekar Prasad editing schemas. Bhardwaj’s trademark morbid sense of humor, which provides some welcome relief from the somber timbre of the proceedings, is channeled primarily via Khan’s quick-witted, off-the-cuff personality here. It especially makes its mark during an audacious and lengthy sequence late in the film during which the two investigative teams present their viewpoints. This moment encapsulates perfectly the spirit and themes of the work and the larger implications they entail.