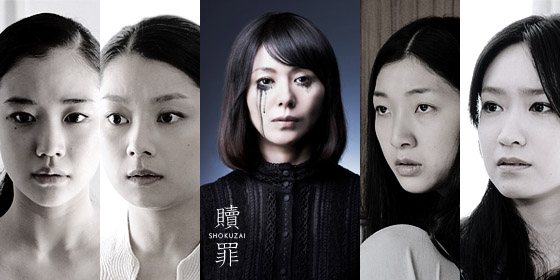 Shokuzai, also known as Atonement, is a five-episode WOWOW Japanese drama adapted from Kanae Minato’s (Kokuhaku) book of the same name, adapted to the screen and directed by Kiyoshi Kurosawa (Tokyo Sonata).

The series stars Kyoko Koizumi as Adako-san, a grieving mother who loses her daughter, Emiri. Adako-san is unable to catch the man who raped and killed Emiri because her school friends are unable to recall any details to identify him. Fifteen years later, Emiri’s friends are young women who are still waiting to pay their debt.

When the series was announced, it seemed a little too good to be true with Kiyoshi Kurosawa at the helm of a Kanae Minato revenge story. Then it got even better when the cast was announced. If you had been able to catch Tetsuya Nakashima’s adaptation on Kokuhaku, you had to at least be curious about Shokuzai — both stories deal with a mother seeking revenge for the death of their daughters, though Shokuzai seems a lot more grounded in reality due to Kurosawa’s style.

Each episode is centered on one of the girls, beginning with Sae (Yu Aoi), who has grown up to be scared of men’s presence and labels herself “a defective woman”; Maki (Eiko Koike), who has grown up to become an overbearing teacher accused of being too violent; Akiko (Sakura Ando), who has forced herself to get stuck in time in fear of bad things happening again; and Yuka (Chizuru Ikewaki), who has surprisingly moved on with her life but has completely different issues with her sister (Ayumi Ito).

By the third episode of the series, I thought I had it all figured it out — I thought these young women’s atonement was to get rid off sexual deviants… or in any case, people that could hurt children. In Sae’s case, a man (Mirai Moriyama) with a French doll obsession that would only take her because of her being defective, or in Akiko’s case where she was forced to choose between a little girl and her own older brother (Ryo Kase). Watching Shokuzai from its first episode to the third one is really an experience that seems to get better and better.

By the time we touch upon Yuka’s case, we realize that we’re not watching an ordinary series. Her issues may be the most up front on Shokuzai, but in turn she becomes the most intriguing. Chizuru Ikewaki’s performance brought back memories of her role on Josee, the Tiger and the Fish — both characters had a slight emotional imbalance. Of course, both are different stories, and she’s a lot more sinister here.

All the acting is superb, especially from Eiko Koike and Yu Aoi who are playing against their type. The cast boasted an impressive list of guests, like Teruyuki Kagawa, Ryo Kase and Ayumi Ito — so what’s not to like?

The simple bleak visuals give a lot for the mood of the story, slightly eerie with the minimalistic sound design and completely unsettling at others. My only complaint with Shokuzai was that the last episode doesn’t seem to have any real build up, which comes from the episodic treatment. I would have liked to have gotten clues of Asako’s background story throughout the other episodes before we had the big reveal — though, maybe there were clues~ I just didn’t notice them. Shokuzai is a series worth several re-watches.