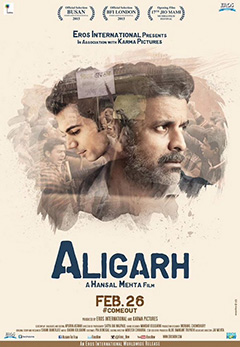 For the last couple of years, Indian director Hansal Mehta has been picking up his subjects quite carefully earning him a certain respect among serious Indian cinema buffs. He follows up his take on Human Rights lawyer Shahid Azmi’s life in the 2013 social drama, simply titled Shahid, and CityLights, his remake of the Filipino crime drama, Metro Manila, with the biographical drama following the life of real life Marathi professor Shrinivas Ramchandra Siras, who was fired from his position at Aligarh Muslim University due to his sexual orientation.

Before watching the film, we must all first know that Section 377 of the Indian Penal Code (which was introduced during the British rule) criminalized sexual activities “against the order of nature” (including homosexual acts), but had been suspended in the year 2009, the year in which the movie takes place.

Simply titled Aligarh; after the city of Uttar Pradesh, the most populous Indian state with over 200 million people and home to the maximum number of Hindu and Muslim population; causing more than a bit of ruckus with the city of Aligarh when it came to the presentation of the movie [1]. Though, the city just becomes the vessel of the story, it is perhaps necessary to understand the subtleties of Mehta’s storytelling— being a linguist that focused on the spread of the Marathi language (one of the 22 official languages in the country) in a mostly Hindi/Urdu-speaking state, Professor Siras was a minority already. Wonderfully played by the incredible Manoj Bajpayee, who adds another memorable character to his repertoire next to Sardar Khan in Anurag Kashyap’s 2-part crime epic, Gangs of Wasseypur.

The loneliness of Siras is evident in that breathtaking scene in which he, as the heartbroken individual that he is now that his life is slowly crumbling, mouths the words to the classic Lata Mangeshkar’s 1962 song App Ki Nazro Ne Samjha [clip] singing the words “Your eyes have understood me to be deserving of love.” Mangeshkar’s voice, known for its evergreen quality, is enough to break anyone with its longing and hurt, and matched to Bajpayee’s watering eyes as he -maybe- accepts his destiny telling his Gods “Why should I be scared of the storm, when you are my shore.” can reach anyone’s soul.

The film takes on another layer following Deepu, a journalist intern looking for his big break, played by Rajkumar Rao (the lead in Mehta’s last two films), who takes up Professor Siras’ cases as it hits the media and the sensationalization of the topic. He strikes an unlikely relationship with the broken Siras, whose only desire is to be left alone. However, through Deepu is that we get to know more about Siras and his relation with his family and his nonchalant view of the rest of the world. It’s really interesting to see how a man who puts so much emphasis on the meaning of words almost abhors having to label himself (with just three simple letters), as well as the feelings he might have felt for another man.

Possible adjustment to 4 solid stars in the future~

Aligarh is already available for stream with subtitles on EROSNOW.