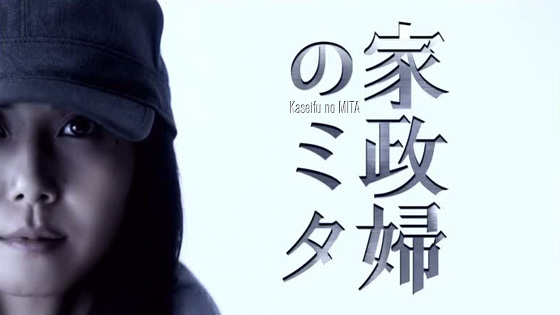 Otherwise known as I’m Mita, Your Housekeeper, Kaseifu no Mita is an 11-episode Japanese drama centered on the life of the Asuda family, who have been coping with the loss of the wife of Keiichi (Hiroki Hasegawa), the mother of their four children — eldest daughter Yui (Shiori Kutsuna), eldest son Kakeru (Taishi Nakagawa), second son Kaito (Shuto Ayabe), and last girl Kii (Miyu Honda). Then the mysterious Akari Mita (Nanako Matsushima) enters their life as the perfect housekeeper. There’s only one rule for her services — don’t ask her to smile.

Also… be careful of what you ask her to do~

Mita-san is the perfect housekeeper. She hands you an empty glass the moment you think you want to drink some milk, she washes your clothes with the perfect amount of softener, keeps the family bathroom pristine after each use, makes the perfect continental breakfast and prepares a Japanese breakfast when your body is beginning to crave one. However, her gloomy nature is somewhat of an enigma. Is Mita-san a robot? Is she Mary Poppins and trying to make the medicine go down?

Ask Mita-san to kill someone, and she might do it… without hesitation or questions asked.

The Asuda family’s drama unravels with each request from each member — a father unable to cope with the aspects of his life that seemed to have been made for him, a daughter dealing with the betrayal of her father, the son who’s lost respect for him, and the youngest siblings trying to endure everything that life seems to be throwing at them at such a young age.

There’s also Keiichi’s father-in-law (Sei Hiraizumi) and his sister-in-law, the clumsy bad luck magnet, Urara (Aibu Saki), and don’t forget Mita-san’s talkative boss (Yumi Shirakawa) and the nosy neighbor. With as many characters introduced in an 11-episode show, it’s a feature to be able to develop each and everyone of them.

The show deals with one of the main social issues plaguing society these days — a weak family unit. Keiichi Asuda is a weak man and a weak authority figure for his children. Each and every one of his actions — or inaction — pushes his family further and further away to the point where his daughter ends up with a substitute male figure in her life and his sons ask Mita-san to do some terrible things.

However, Kaseifu no MITA has light moments in it when you least expect them — or I guess it’s sometimes expected when you get to know Urara-chan to her fullest extent. And that’s what’s genius about the show. You seem to care for all the characters. I would even dare to say that one of the scenes between Mita-san and Keiichi’s father-in-law might be one of the most touching scenes in the series, perfectly played by Sei Hiraizumi — who also plays a father figure in Hana & Alice opposite Yu Aoi and their now famous scene of Wo Ai Ni [1].

The acting in the show is very solid, but I think what attracted people to it are the characters and the surrounding story. The mystery behind all this drama is hard to even imagine, and Kaseifu no MITA just keeps giving and giving until its final episode — no wonder the last episode of the show had a whopping 40 points in ratings.

You can watch the show in a variety of subs in CrunchyRoll.