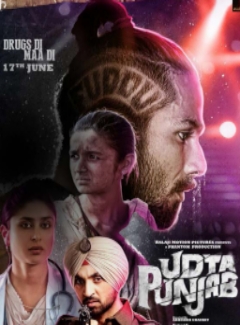 Not unlike David Lynch’s dismantling of the notion of small-town Rockwellian America, Abhishek Chaubey’s much talked about drug-abuse exposé, Udta Punjab, manages to peel back the thick veneer of idealization long propagated by Bollywood (and, I’m sure, regional film industries) regarding the eponymous Indian state of Punjab. The act, in this case, may not seem as deliberately subversive on the surface, but the final product is no less removed from the norm.

And that norm, perhaps cemented forever in the hearts and minds of many twenty years ago by Yash Raj Films’ Dilwale Dulhania Le Jayenge, arguably the second most popular Indian movie of all-time after Sholay, has consisted of plush green and yellow mustard fields, happy and healthy peasants singing folk songs with the kind of zest reminiscent of Soviet and Chinese propaganda films, and a general sense of bonhomie and camaraderie.

Without resolutely announcing itself as a pioneer, the film, thanks to its unwaveringly focused approach to the subject matter, ends up depicting its setting in a very different light. This is a Punjab of poor infrastructure, agrarian instability, political connivance, obscenity-laden language, and a moral and spiritual crisis related to the drug menace. The Green Revolution [1] looks like a distant memory. Not coincidentally, perhaps, a character mockingly refers to the increasing sophistication of drug trafficking as “Green Revolution Part 2.”

In the well meaning, if not particularly well executed, documentary short, Glut [YouTube], it is revealed that 73.5% of Punjab’s youth is addicted to drugs. While local politicians have naturally debated such alarming figures, various studies have suggested that the problem is indeed widespread [1]. The film’s trailer, when initially released, included a voice-over proclaiming a similar figure. Perhaps to avoid any future problems, the filmmakers decided to mute the exact percentage. What remained, however, is the suggestion that this land of five rivers is becoming more and more like Mexico.

Speaking of which, it is safe to say that a good portion of drug-related films made in the recent past have revolved around this beleaguered Latin American country. The list includes Steven Soderbergh’s much-lauded Traffic, which remains the benchmark for filmmakers trying to illuminate various facets of the drug epidemic. Chaubey and co-writer Sudip Sharma, who previously wrote the taut revenge thriller NH10, have employed a similar narrative structure here. Unlike the screenplays by Guillermo Arriaga, the construction of overlapping storylines in these films does not come across as overly schematic. Udta Punjab may not be as ambitious (or ambiguous) as the Soderbergh movie, but it is more intimate.

Although heavily fictionalized, the film, thanks to an abundant amount of research, still manages to get a purchase on the ground reality of the situation. Even if the filmmakers could not directly point fingers at the authorities at large for allowing—even facilitating—the sale of heroin and, especially, synthetic drugs, the proceedings make it obvious the kind of political collusion that likely exists. Without being overly violent or graphic, it is more forthcoming regarding the ill effects of drug abuse. Not surprisingly, some have called it an after-school special (not entirely a criticism in this particular case). Frankly, for all its virtues, that other recent landmark, Requiem for a Dream, is more deserving of that tag than Udta Punjab.

Similar to his debut feature, Ishqiya, Chaubey once again exhibits a good eye and feel for hinterland towns and villages, not to mention the sorts of characters that tend to populate them. He and DP Rajeev Ravi, a veteran of Anurag Kashyap’s films, ably capture the decrepitude without emphasizing it.  This is also thanks partly to the precise work by editor Meghna Sen, who previously edited Omkara and Kaminey for Vishal Bhardwaj, Chaubey’s mentor, and the performances by the talented young cast.

Shahid Kapoor’s drug-addled rock star, Tommy Singh, might be an oft-seen creation on the surface, but Kapoor finds a way to make him a character worth caring for; his gradual transformation is one of the film’s highlights. A small-town boy who was rushed into stardom faster than he could handle it, Tommy is a jumble of emotions and attitudes. In many ways, he is the mixture of the pair of diametrically opposite twin brothers Kapoor essayed in the aforementioned Kaminey: scary and destructive one minute, almost child-like the next. Although his career continued to flutter for a few years even after the critical and commercial success of that film, it’s encouraging to see Kapoor finding his calling of sorts in offbeat projects such as this and Haider.

It’s perhaps even more impressive to witness Alia Bhatt, whose unnamed character is a migrant worker from the state of Bihar who accidentally gets sucked into the world of drugs and prostitution, taking on another challenging role so soon after Imtiaz Ali’s Highway. She once again proves that embodying a character such as this goes beyond not wearing makeup or certain kinds of clothes. I cannot imagine anyone saw this coming given how convincingly she inhabited her bimbette avatar in her debut, Karan Johar’s Student of the Year.

The film’s best, most subtle performance, however, belongs to Diljit Dosanjh, a movie and music star in his native Punjab who makes his Bollywood debut here. A meager sub-inspector in the Punjab Police, his character, Sartaj Singh, finds himself at a crossroads when he discovers that his younger brother has long been addicted to the kinds of substances regularly smuggled under the watch of the police force due to their arrangements with drug lords and local politicians. Although the scenes in which Singh and a doctor/activist (K.Kapoor) try to uncover a drug factory are the film’s least convincing, Dosanjh’s sincere, if somewhat foolish, conviction about what he is doing somehow makes them palatable.

Udta Punjab, as most Indian movie fans are aware, ran afoul of the country’s all-powerful censor board (CBFC), a body that, by definition, is only meant to certify films. Although co-producer Kashyap had already fought his share of battles with the board in his previous films, this became both more personal and political when the revising committee failed to provide the filmmakers with an official list of cuts so they could take their case to the tribunal. They eventually ended up at the Bombay High Court, which passed the film with a single cut [1]. Perhaps even more damaging to the film was the fact that it was leaked online just prior to its release. Nevertheless, not unlike many of its characters, it has overcome a number of struggles to emerge triumphant—in more ways than one.