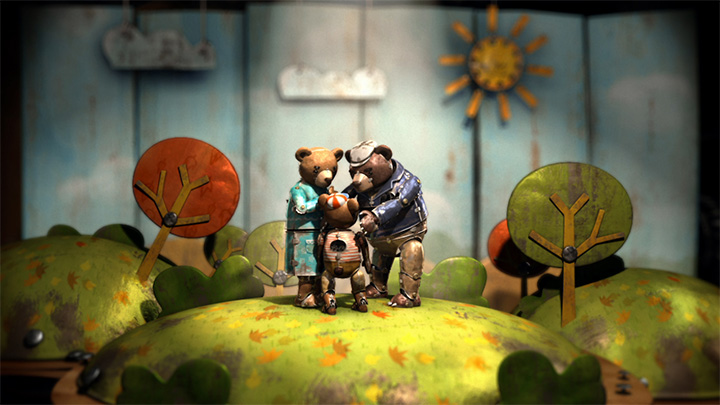 The Latin American animation industry is in its infancy as a whole. Though films like Metegol failed to make any impression outside the Latino market (I think it would’ve done well marketed towards the people that made Un Gallo con Muchos Huevos a hit in the US, without the need of iffy English dubs); this year not one, but two Latino projects made it to the list of Academy Awards nominated list. Brazil’s Boy and the World is competing for Best Animated Film, while Chile’s Historia de un Oso competes for the Best Animated Short against animation biggies like Don Hertzfeldt (previously nominated for Rejected), Konstantin Bronzit (previously nominated for Lavatory Lovestory), Richard Williams (winner for A Christmas Carol, as well as his work for Who Framed Roger Rabbit)… and of course, animation giant Disney-Pixar backing Sanjay Patel.

Bear Story is, well, the story of a bear, who works as a street performer with an almost magical and extremely elaborate diorama nickelodeon machine that tells the story of his family. The short describe the horrors of the circus (puns or not on the political history of the country), as they creep in at night to take you away from your loved ones. Through the hardships, the spirit of this bear is never broken as he manages to return home to his family.

Though the style falters when dealing with the organic elements in the story (that’s some cringe-worthy bear cub animation), it shines its best during the mechanical environment of the diorama. It’s beautiful during these scenes, and showcases some of the best texturing and lighting seen even within the commercially released animated films in the region.