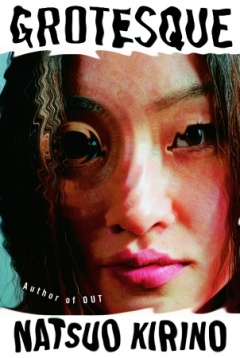 Reading Natsuo Kirino’s Grotesque is a little like watching the first three episodes of Star Wars: you start off indulging an adorable kid who admittedly has some emotional problems; then several hours later, you find yourself staring at the same kid with horror and disgust as she screams obscenities and catches on fire.

It’s possible that I’m exaggerating, because no one actually catches fire in this novel. If someone had, it might have at least provided some kind of cathartic release. But I’m getting ahead of myself.

Grotesque is billed as a murder mystery, but it’s less of a whodunit than a probing inquiry into the ills of society. The main character – anonymous and obscured by design – gives an unflinching account of how much she hates everything: her school, her co-workers, her family, and especially her younger sister, Yuriko. The novel reads as a confessional, but make no mistake; the narrator is unrepentant about her malice, and the last thing she needs is your forgiveness. Even as the tragedies pile up around her, she really couldn’t care less. She takes no small measure of glee in the deaths of Yuriko and former classmate, Kazue Sato, whom she had tormented during their schooldays. From the start, she’s thoroughly unlikable but intriguing.

As the story progresses, we learn more about our sociopathic narrator and how she isn’t exactly all she seems to be. Kirino weaves together the stories and perspectives of all her main players: we hear the murderer’s testimony, excerpts from Yuriko’s and Kazue’s diaries, and even missives from a childhood friend, Mitsuru. A common thread that begins to emerge is the idea that all these characters are helpless in the face of societal pressures and eventually crack under the stress of expectations and self-loathing. All the characters are, in a way, grotesque.

Though I began the novel with an insatiable curiosity for what might come next for our anti-hero narrator and her twisted relationship with the world, the ending was an enormous let-down that felt contrived and forced. Maybe this was some kind of clever meta-statement by Kirino, as she certainly used her characters as unforgivingly as the world they inhabited. Her manipulations weren’t successful, however, only briefly soaring into the unknown before falling quite flat into a rapidly cooling puddle of various bodily fluids.

Sad to say, Grotesque ended with a bang… and then a whimper.