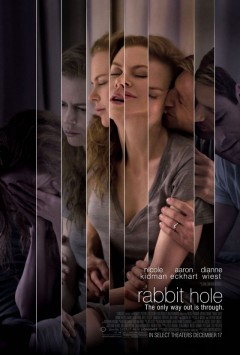 John Cameron Mitchell (Hedwig and the Angry Inch, Shortbus) takes on the adaptation of David Lindsay-Abaire’s play of the same name, which tells the story of a couple grieving the loss of their son. However, the story is far from mere drama and is infused with dark comedy… to ease the pain.

In Rabbit Hole, Kidman plays Becca, who’s coping with the fact that her child was killed… or in reality, she’s not really coping. She attends the meetings with husband Howie (Eckhart), but she doesn’t get into the session groups. In one scene she bursts out at parents who have lost a kid too and were rationalizing their loss with God’s gain. In that sense, Rabbit Hole is very real to those of us who can’t find solace in religion… those of us who cope in a different way.

And she does. She finds something with Danny (Teller), the boy involved in the accident that killed her son. The film also avoids complete sappiness — even though sappy movies aren’t really bad, but if you want to get a good cry, you’re probably looking the wrong way.

Nicole Kidman has always fared much MUCH better with little less flashy films, which is the case with Rabbit Hole, relying all its got on wonderful acting. Her scenes opposite Dianne Wiest, playing her mother, are possibly my favorite scenes for drama, though Teller does a fine job playing the awkward comic book artists talking to Becca in the park.

Eckhart also delivers by playing the half that is healing faster, and it’s heartbreaking seeing a marriage take a hit by such  a tragedy. So glad that none of the characters are “the bad one,” these are just things that happen.

PS: Please, Nicole, I know you have to make a living, but please stay away from big Hollywood films. You’re the bravest when you choose to make films like this… or Dogville ;D