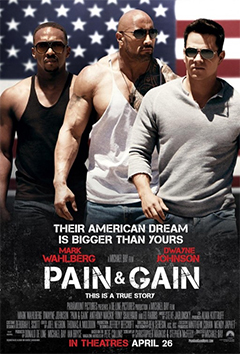 Someone once told me, without pain there is no gain. It was a terrible joke made to me after watching Michael Bay’s Pain & Gain and yet, there was some resonance there. Never would I have experienced a film as baffling, but surprisingly entertaining, as this one, without a truckload of terrible latched onto the fun.

Loosely based on a true story in the horribly sunny city of Miami, Bay’s Pain & Gain is all about money and muscle. Opening with Marky Mark working out on the side of a building yell-muttering, “I’m hot! I’m big!” to himself instantly signals that there’s no way in hell anyone should take this seriously. Five seconds later, he’s getting chased by cops in shaky-cam, followed by slow-motion. His character, Daniel Lugo, is about to lead us all on a journey into what led him here, and boy is it one totally absurd story.

Picture this: three bodybuilders, two who work together at a gym (Walberg & Mackie) and overly religious friend recently released from prison (Johnson). After attending a get quick rich seminar, they decide to team up in order to rob a very rich gym client. When they kidnap and torture him for his cash and property, shenanigans ensue.

This all might sound pretty straight-forward, but the way the tale unravels is practically a teenage boys play through of Grand Theft Auto. Strippers, cocaine, guns, nice cars, and the fanciest estates money can buy in Miami. If all this sounds up your alley, you might as well stop reading now, because it’s definitely a film for you. Every time Marky Mark brings up this idea of the American Dream, one of the many features this little film shares in common with Harmony Korine’s Spring Breakers, you almost want to shake your head. Is this really the American Dream? Women who are nothing but sex objects and comedic props, extorting money from a rich man, getting beefed up at a gym? Well, it’s not mine, but Michael Bay and I are two very different people.

Let’s be real, this is Michael Bay we’re talking about. No amount of self-awareness can make all the racist, sexist, and homophobic jokes in the world go away, and it certainly doesn’t. It’s confusing how many tasteless jokes of the aforementioned natures were crammed into the screenplay considering Markus and McFeely’s writing credits are basically Narnia films and Captain America, but again, it’s Michael Bay. Believe me though, it is a very self aware film. There’s one scene that quite literally reminds the audience “THIS IS STILL A TRUE STORY” because of how completely ridiculous the idea of a man grilling chopped up body parts is.

On top of that, Bay brings down his explosion to minute ratio from a thousand per minute to just one tiny scene with a contained explosion in the whole film. It’s almost something to be proud of, and yet as a two hour comedy, you actually wish there were more from how slow it gets at some points. This isn’t to say that it isn’t downright hilarious at times. Every performance is tailored to bringing out the humor and self-awareness in Pain & Gain, with Rebel Wilson and Anthony Mackie playing well off each other, and Tony Shalhoub delivering his jokes with a whole lot of character.

For all of Mark Wahlberg’s amusing moments, he doesn’t stand a chance at commanding the screen like Dwayne Johnson does. Every ounce of absurdity comes out through The Rock, who is completely wild in almost every scene he’s in. Whether he’s singing gospel music with a choir, running away from cops with money pack dye on his face, snorting cocaine at a neighborhood watch meeting, or even getting shot at while swimming away, he’s just plain fun to watch.

It’s this mix of entertaining comedy and tasteless comedy that makes one feel like they’ve been poured into a blender with a protein shake after Pain & Gain. For all its faults, and all my disdain for Michael Bay, Pain & Gain is still more interesting than pumping iron will ever be.