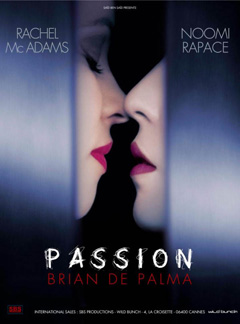 I may not be very familiar with Brian De Palma’s filmography — yes, I haven’t even sat through a complete viewing of Scarface, whatever — but you gotta admit he hasn’t released something worth something since… maybe the mid-90s… with Mission Impossible or Carlito’s Way. So I’m not gonna give him a glowing review just because he is Brian De Palma doing a remake of a conventional film like Crime d’Amour was.

If you thought the French could be risky in a film called “love crime,” you’d be surprised that De Palma’s Passion has tenfold the melodrama, tenfold the kinky sex, tenfold the lesbians are pretty crazy with none of the (graphic)  “passion” we’re speaking of that Crime d’Amour kind of did without any of those elements. And though it is faster-paced and a lot more stylized, these elements do little service to better De Palma’s direction of her actors.

Passion tells the story of two advertising colleagues, Christine (McAdams) and Isabelle (Rapace) who are working on an account for a client in London, but instead of working all night- Christine entertains herself with Dirk (Anderson) and enamors Isabelle a little bit, so she ends up working on the advertising campaign throughout the night. Isabelle is also sent away to London where she nails the account (as well as Dirk), but instead of receiving the praise, Christine takes it for her and makes Isabelle believe that what’s good for herself is also good for her. However, the other assistant Dani (Herfurth) doesn’t agree.

People that know me know that I’m a really big Rachel McAdams apologetic, and I really love Noomi Rapace, so I really REALLY wanted this to be good. However, Passion miscasts its leads completely, and De Palma’s direction is good for nothing because McAdams performance is… sadly, so poor is pains me to say. And I know she can be a mean girl because she was freaking Regina George, and she was sort of a mean girl in The Hot Chick, but she seemed quite miscast in the role of the mean b!tch Christine and it shows on that scene where she has to throw her phone to show how pissy she is, but paired with the bad dialog, the bad direction and her uneasiness, it’s just pure horrible bad acting (of not the funny kind).

Noomi Rapace doesn’t fair much better either, though she played her cards right in her neurotic scenes, she lacked a certain vulnerability to make it an easy target in the story… to make it believable that McAdams could indeed mean-girl her. Maybe if they had switched both roles around, their dynamic had worked much better.

Then De Palma throws us a curve with the gender switch of the assistant and Herfurth does her best to draw something out of the delusional character she’s working with that De Palma thought was an edgy good twist to the rest of the “edgy” elements he’d been adding. It just felt like a desperate need to tell people “look at me, look at me. I can write and direct the crap out of this conventional French film.” Instead, of course, Passion can’t even excel in what the other did right.

Extra quarter of star for that scene with the hard lights casting shadows of the blinds.