Wolf of Wall Street, The 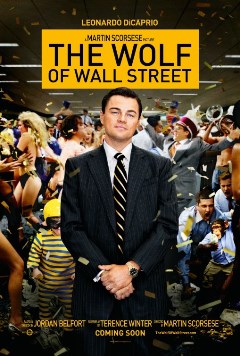 Ever since the first trailer [1] for Martin Scorsese’s The Wolf of Wall Street aired, I was so pumped up to see it, and the second trailer [2] kept my excitement intact while also providing more details about the story. I’ll be honest here with you: Scorsese’s black comedy adaptation of Jordan Belfort’s rise-and-fall biography is currently my favorite film of the decade in spite of its apparent undeep content and multiple amusing (yet fucked up) douchetastic moments.

From the opening moments, we see Jordan Belfort (DiCaprio) already loaded, high on cocaine, and having the time of his life. But how did he get there? The Wolf of Wall Street takes us back to 1987 and shows a younger Belfort working as a newbie stockbroker in an established Wall Street firm. Just when he gets the gist of how things are done, Black Monday happens, the firm shuts down, and Belfort’s screwed.

However, his wife Teresa (Milioti) shows him the papers, which leads him to work at Long Island and deal with penny stocks. Thanks to his aggresive drive and pitching, Belfort makes lots of cash to live properly. But when he meets Donnie Azoff (Hill), he takes it to the next level and creates Stratton Oakmont, a firm with a respectable name, but they operate on a pump-and-dump scam scheme. The consequences: Belfort’s income skyrockets, the firm becomes a huge deal,and then everyone wants a part of Belfort’s cash and libertine lifestyle; — which includes drugs, sex, parties and more… more… more… more!

And as it happens with illegal activities, the FBI gets involved. Party’s over right away? Not really.

Terrence Winter’s (Boardwalk Empire) screenplay gives a lot of fucks (literally), but The Wolf of Wall Street doesn’t give a fuck about Belfort’s victims at all, just exactly how Belfort would operate. By the way, Jordan didn’t start off as a full-fledged conman until a vital scene involving Mark Hanna (McConaughey) takes place earlier in the film. Following Belfort meeting Hanna and a detailed transition from rags to riches, Wolf showcases Belfort’s luxurious (and very lusty) lifestyle nonstop in hilarious fashion and at a steady pace.

Yes, anyone would love to be Jordan Belfort (or have his money) thanks to how DiCaprio looks amazing and very charming — not surprising, considering he fared great in The Great Gatsby as a similar character minus the aggressive lifestyle — playing the guy whose over-the-top (albeit fucked up) lifestyle is a dream. DiCaprio willingly relishes in it and carries the film superbly. But at the same time, I don’t think anyone would want his high-pressure job and constant substance addiction, let alone dealing with douchebag friends such as Donnie or getting their ass chased by the FBI.

The supporting cast is really great: Hill was a stellar douchebag as Donnie, whose bromance with Belfort was amusingly watchable. Rob Reiner played well as Belfort’s dad, a voice of reason when the excesses get bigger, and Kyle Chandler was very well cast as FBI Agent Denham, who is ready to take down Belfort no matter what. While Jean Dujardin, Joanna Lumley, and Jon Bernthal shined in their few minutes of screentime, two supporting actors stood out the most: one of them is Margot Robbie, and she gets a major career rub thanks to her performance as Beflort’s much sexier second wife, Naomi. How sexy is she? See Donnie’s initial reaction to her. The other great supporting actor is Matthew McConaughey, who was phenomenal as Belfort’s trigger, and you almost wish that The Wolf of Wall Street was about Mark Hanna instead of Jordan Belfort.

Martin Scorsese’s direction and craft keeps everything tight and well-paced for its lengthy airtime and makes DiCaprio look bigger and better thanks to everything going around in Belfort’s lifestyle that seems trippy and dark, yet it’s also pretty damn funny and amazing to watch thanks to its characters and scenarios. Wolf is packed with references to other films (The Graduate is one of them) and life moments, but there’s a standout hilarious Popeye analogue that you should see for yourself.

Just to end this review, I know it can be easy to dismiss The Wolf of Wall Street for many reasons due to its profanity-ridden dialogue, glorifying Belfort (the film doesn’t really do that, but I can understand people thinking that way), and for being a “style over substance” film. However, I think that the film combines both style [see: visuals, camerawork, soundtrack] and substance [see: acting] perfectly. But you want to know why I think this is really amazing? For its 179 minutes of running time, I never felt bored or tired with The Wolf of Wall Street on my first watch at all, and I can’t get it off my mind yet.