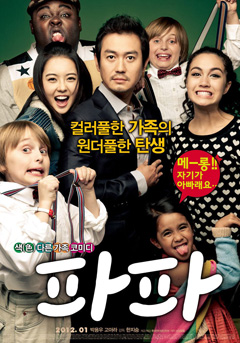 South Korean cinema has birthed quite a handful of feel-good movies and some prime blockbuster flicks for the past couple of years [1][2][3], alongside candy pop music and their music videos [1], telling us one thing: South Korean soft power wants our attention and our money. But, of course, with the attention comes fingers (a lot of them) pointing at them, causing a stir [1][2][3][4] when minority representation is unfair or outright senseless.

Known for being a homogenized nation, it’s common seeing movies or music groups that look fairly similar, except for the seldom Chinese or Thai boy or girl group member, so when this year’s movie — simply titled Papa — was announced to be about a multicultural family, interest naturally peaked.

Written and directed by Han Ji-Seung, and shot partly in the United States, Papa tells the story of a relatively not-so-successful talent manager, Choon-sub (Park), who ends up in America following his escapee talent — said to be the one to dethrone Kpop’s Queen Lee Hyori — who has ended up unmarried and pregnant. As a result, Choon-sub is in debt and at risk of being killed by his talent’s shady sponsor, the reason why Choon-sub decides to stick around after his visa runs out, quickly gets involved in a staged marriage and ends up as the father of a colorful handful of children — tiny Rosie (Azar), the white hip-hop twins, hyper duo Jimmy and Tommy (the Townsend twins), emo girl Maya (Kelley), Jewel in the Palace fan Gordon (McMillon), and big sister June (Go). All of whom decide to play the game of Choon-sub being their guardian in order to keep the family together.

There’s a little bit of cultural clash for viewers, being used to Koreans expressing themselves loudly on Korean film or Kdramas will little prepare you to see Choon-sub talking out loud and shouting at June, while everyone in unnamed-city America stares at them doing nothing. It’s doubtful people wouldn’t react to that when seeing these actions in public, but I guess that’s part of the actual character development from Choon-sub throughout the movie, and it all pays off by the end, which is wrapped up in your typical happy Hollywood ending that is almost too sweet of a feel-good movie. Though the movie struggles to find its pacing, and seems to stretch itself too much just halfway through it, there are heartfelt moments perfect for discussing what the meaning of family is.

In the end, Papa is an ensemble piece that’s as much about this vibrant household as it is about this talent manager looking for a big break. Though the acting is uneven — and the twins can really get on your nerves with all that much rhyming — there are honest moments that save it. Go Ara has a few dramatic scenes that show some of her character’s vulnerabilities — none have to do with her singing or the musical sequences — but my favorite scenes had to do with Michael Anthony McMillon’s Gordon, and how genius it was to make him a fan of the popular historical drama Jewel in the Palace, making him a communication link between Choon-sub and the others.