Sorcerer and the White Snake, The 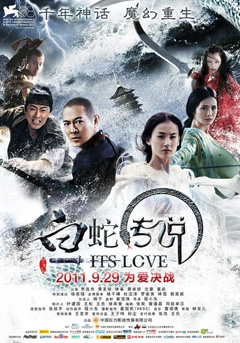 This has got to be the most mis-marketed film of the year. Without having an actual idea about what the film might be — unless, of course, you’re familiar with The Legend of the White Snake [1] — just by looking at the posters [1] you’ll either think this is a full-on fantastical martial arts adventure featuring Jet Li, an apocalyptic disaster movie [1], or a possible girl friendship/lesbian movie [1] if you guide yourself with the alternate English title.

The Sorcerer and the White Snake is a re-telling of the ancient story of a White Snake demon who takes the shape of a woman and falls in love with a human man. This, of course, is forbidden by the natural order of things, right? Everything in its place — according to Master Abbott Fahai (Li), all demons must be eliminated and humans are not to be with them.

Susu (Huang) and Qingqing (Choi) are two demon snakes having fun frolicking around when a group of herbalists arrive to find medicinal herbs to take back with them. Among them there’s kind-hearted Xu Xian (Lam), who is picking too many herbs from the mountain, according to Qingqing the Green Snake. So Qingqing, being a bit playful, scares Xu Xian to death, making him fall into the water.

Susu the White Snake in lady-form dives in to rescue Xu Xian, giving him some of her special Life Energy. This is, of course, love at first water kiss for both of them — Susu can’t stop thinking about him and Xu Xian believes he’s got to find the girl of his dreams.

During the local festivities, the monks of Lei Feng Pagoda — Master Fahai and his monk in training, Neng Ren (Zhang) — discover unusual demon activity. They catch a Bat demon that attacks Neng Ren, who then begins to transition from human to demon.

Let me start off by saying that there were some really interesting 3D shots in the movie, but the CGI work in it was pretty horrible. Maybe not the backgrounds, which had a stunning color palette at times. But all actual CG characters in the film, from minor to the more important ones, like the snake demons or the bat demon, were bad. The Sorcerer and the White Snake also isn’t a Wu Xia film. This is a love story, so the insipid title of It’s Love has more to do with the film than the original title.

The basic story has its good points, however. The presentation of a monk that sees things as black and white concepts but learns to see the gray area is a great theme to see in blockbuster films — something you can’t even see in huge hits like Avatar. The tragic love story is a plus. It’s something that audiences (American or any other around the world) will be able to connect with. Why can’t Susu and Xu Xian just be together? Why must the monk, who is supposed to be the source of all good things, forbid such love? Just because Susu is a Snake demon does that mean her love isn’t real? Many metaphors can be drawn from this film.

There are also many of funny moments in the film — courtesy of Wen Zhang, whom we saw on China’s big hit Love is not Blind. What really hurts the film is the horrible CGI and how broken one storyline seems from the other. However, an ending as tragic as this film’s elevates it to something worth discussing.

The Sorcerer and the White Snake soundtrack features a great song called Promise (许诺) [MV with Subtitles] performed by the film’s leads, Eva Huang and Raymond Lam. The video contains spoilers of the film, of course. “I vow to live for you ’cause I can lose anything but you. When there is happiness, love is never a mistake. Our love shall survive longer than any time.”