As One (Korean Film) 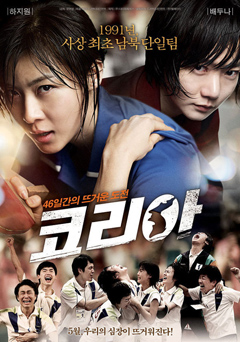 Now that we’re through the Olympics, we get to talk about one of my favorite sports: table tennis. Excuse me, ping pong for those of you not familiar~ Table tennis, politics, a true story and Doona Bae! Can’t get better than As One, which follows the South and North Korean teams that united as one Korean team to beat China at the 1991 World Championship held in Chiba, Japan.

As far as sports movies go, As One is not really breaking any ground. It’s a feel-good underdog sports movie, it just happens to have a lot of heart for political reasons, so by the end of the movie you have to feel… at least a little bit moved. I mean, Korea is split as if two brothers separated by destiny — this all reminds me of Taegukgi, which violently tears your heart apart, but I digress…

It all begins with the rivalry between North and South at the ping pong table. South Korean ace player Jung-hwa (Ha) battling it out against North Korean Bun-hui (Bae), but neither of them are matches for China’s ace player. Then it all goes awry when both teams are informed that they are being joined into one team in order to promote better relations between their nations. The result is chaos, of course. It’s funny — Choi Yoon-Young particularly shines as the love-struck Yeon-jung — as much as it’s tragic.

My only gripe with the fairly straightforward script is that the Chinese players are totally evil — stepping on a ping pong ball, ooh~~~ —  but I guess you gotta have a clear “enemy” to unite against. Obviously, the big selling point of As One is its two leads. Ha Ji-Won and Doona Bae explode in it, delivering strike by strike to make their final scene all the more emotionally wrecked.

As far table tennis movies go, I’m so glad there’s a serious movie with it. Some people just don’t see how much work it is, just referring to it as the game that it was: an after dinner game. However, all those practice strikes against the shooting-ball machine to get that perfect angle and turn… all the training, the sweat. It’s a lot of emotions, just like any other sport, and As One delivers. It’s exciting to see a match on regular television, but seeing the matches in the film — especially the ones that had the close-call points — it was nerve-racking. I’m pretty sure the slo-mo close-ups that froze in time helped with the pending emotions.

Overall, As One is a solid, entertaining flick — it’s got, surprisingly, enough humor! Though, I don’t know how much of THAT story is true. It also has good production value, and more than above average acting. The North and South Korean angle to the story adds a layer that a regular underdog story wouldn’t normally have. In the end, would I watch it again? Probably.