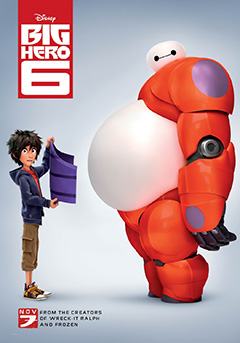 There are many times that I purposely go into a film avoiding any press, hype or expectations in order to discover the movie all on my own and be free of potential disappointment. With Big Hero 6, this paid off in a big way.

It focuses on Hiro (Potter), a 14-year-old genius who loves robotics to distraction, much to the dismay of his older brother, Tadashi (Henney), who has high hopes for his younger sibling and manages to inspire him to apply to the local “Nerd College” along with his crew of nerdy friends. But just as success is in his hands, Hiro is struck with tragedy and is forced to face a different future than he planned. In comes Baymax (Adsit), a hapless inflatable robot built to heal people, who goes to extremes to help fix Hiro. Along with some super-intelligent and delightfully nerdy friends, the “Big Hero 6” will fight their enemies and become the newest heroes on the block.

Like I stated, I didn’t know much going into this movie, however a few things became abundantly clear as I watched; 1) this is a Marvel movie. (And I realized it was a Marvel adaptation BEFORE I spotted the painting of Stan Lee.) 2) They’re totally going to be turning this into a TV show. That being said I think this is a great introduction into the Marvel universe for youngsters. It has a lot of emotion and energy throughout the movie, engaging the audience and really getting them to care about the characters – even the robotic ones. Many times, animated films rely heavily on graphics, art and now even 3D to really carry a story; but Big Hero 6 envelopes the viewer in rich details, while still managing to keep us invested in the storyline and characters.

Now, the city is somehow a hybrid of San Francisco and Tokyo, with giant floating fans above the sky and many architectural similarities to traditional Japanese style, but none of this is ever explained. It felt like they wanted us to ignore the fact that there’s so much going on around the main plot. Maybe that’s a ploy to get us interested in future continuations of this story and characters, but for those people that are only going to see this film, it leaves the viewer with paper thin sense of the world these very well developed characters are from.

Over all, Big Hero 6 is highly entertaining, and as I’m sure Disney intended, leaves the audience wanting more. If you’re looking for a film that’s got plenty of humor for the kids and the adults alike – with just enough emotion to keep even the most cynical of animation fans’ attention, you should definitely check it out.