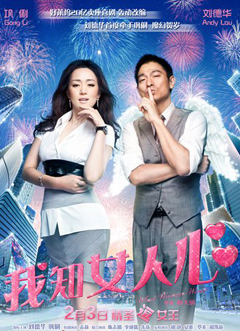 It has been years since I’ve seen a repeat of the American rom-com, so the details are a bit murky. However, it does feel like I Know a Woman’s Heart does some things better and others not so much.

The film tells the story of marketing hotshot Zi Gang Sun (Lau), an over the top ladies’ man who can get any woman by sweet talking and acting smug, and in the process deteriorates his relationship with his own daughter. One day, when the position of a new Creative Director opens, he meets Yi Long Li (Gong) and loses the job to her… in a fated night, he gets electrocuted, and starts hearing women’s thoughts.

Sounds familiar? Yes, I Know a Woman’s Heart is almost a exact copy of What Women Want, except for a few details. This Chinese remake is a super glossy version with high class and high-end gadgets, work environments, and leisurely places. The product placement is quite… blatant at times. Sometimes the movie felt more like a music video.

The few good things about this, however, seems to be Gong Li and Andy Lau’s on-screen chemistry. They play each other well, and their attraction is better developed. There’s no odd crotch-viewing scenes in which Gong feels uncomfortable, in fact, her character seems to be a Creative Director first. Her guarding of her job against Lau’s obnoxious behavior is more believable.

Lau’s character also gets a few changes that make him more than just a ladies’ man. He tells it like it is, and tells everyone that he’s out to get not Li’s job, but get her out of there. His dislike towards her is stronger than Gibson’s version. Sun also gets a father figure that gives him a background, and a way to fix things.

I Know a Woman’s Heart focuses more on the relationship between Li and Sun, while also allowing his character to re-establish his relation with his father and his daughter. However, it does lose most of the laughs… making it rather boring. The film is marketed as a romantic comedy, when it actually feels a little bit more like a light drama.