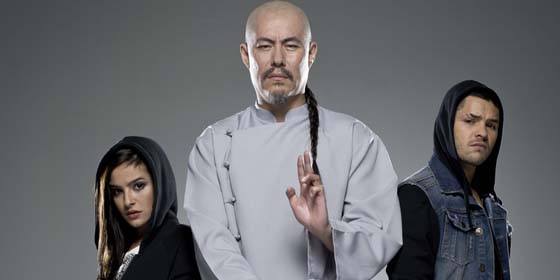 I am… not going to lie to you. Fifteen years ago, I would have totally ate all the Cumbia Ninja business up. I think that in terms of Latin-American-based entertainment aimed at a pre-teen and early-teenage years, the show does offer some kind of technical quality that’s rarely seen in regular telenovela programming.

But, my Gosh~ how much do I hate these freaking songs? It isn’t enough that they’re included within the storyline, but they also include the songs — just the one titled El Horóscopo Dice (The Horoscope Says) [MV] — within the commercial break every single time. The biggest draw to the show, however, has to be its title: What does Cumbia music have to do with Ninjas? The sad thing is that they answer this on the first episode, and it’s the silliest thing ever.

Cumbia Ninja seems to have a slightly complicated setup. It first follows Hache (Ricardo Abarca), a reluctant gang member of El Cruce group who rule La Colina neighborhood, led by Hache’s brother Chico who is murdered by the opposing gang during a concert where Hache runs into Juana Carbajal (Brenda Asnicar), the daughter of a successful entrepreneur who is murdered at home alongside the rest of her family while she is out. Believed to have been also killed, Juana escapes with her caretaker Elba (Helena Mallarino), and becomes Nieves.

Besides murder, backstabbing, gangs, despair and love… there’s dragons and music. Really bad music with profound lyrics such as “The horoscope says that I’ll be by your side, the horoscope says that we’ll be in love. The horoscope told me when, how and where I’ll give you the first kiss.” And that’s not even the weakest of the tracks, that honor goes to Ceviche [MV][Lyrics].

We’re not even halfway through the show, I know, but I don’t think the mixing of fantasy elements fits well within the scheme of the show- they seem to detract from the core drama of the characters who are dealing with their loss and their identities, even if Master Xiang Wu (Víctor Jiménez) delivers philosophical pebbles. Though my American-influenced side raised an eyebrow when seeing Master Xiang Wu on screen with his attire and his speech, I’ve resigned myself. I wish they would have taken more contemporary liberties in his representation considering they’ve had a mishmash of elements by featuring “some” mandarin dialog, the dude (or maybe Master Xiang Wu’s aid apprentice) known as ‘Karate’ who plays the zither and even showing Koinobori [1] hung nearby Master Xiang Wu’s temple.

The acting is fine, but I’ve already lost interest when finding out who killed Juana/Nieves’ family. Maybe the reveal was given away too soon.