Two Weddings and a Funeral 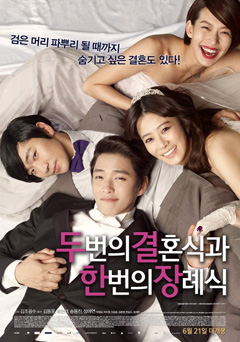 When Amy had the chance to interview director Kim Jho Kwang-soo, I knew someone had to get this review out when they first got their hands on a copy of South Korea’s (sort of) first LGBT romantic dramedy — or the first mostly “mainstream” feature-length involving numerous LGBT characters, that is.

While LGBT movies tend to be plagued by hardcore melodrama, almost always including an affecting death that may trigger a character spiraling out of control or showing their lonely futures, there are movies that gloss over all the darkness, movies like F*cking Amal, with a certain foreign cult fame, or Were the World Mine. However, none in my mind has crossed over the mainstream the most than, perhaps, the peppiest LGBT movie of them all: Imagine Me & You.

If I had to compare Two Weddings and a Funeral to any movie, it would be that one. Except featuring two gay male characters and set in South Korea. The cultural unknowns make Kim Jho Kwang-soo’s feature film debut a surprise, while those familiar with South Korean films — especially those who love romantic comedies from the country — will find it comfortable territory.

The story follows a gay man, Min-Soo (Kim) — a recurring name in Kim Jho Kwang-soo’s shorts Boy Meets Boy, Just Friends, and Love, 100C — a doctor at a local Seoul hospital who’s about to get married to his lesbian doctor friend, Hyo-jin (Ryoo), to get his mother off of his back. Hyo-jin wants to front like they’re a solid married couple so she can adopt a baby with her girlfriend, Seo-Young (Jeong), so after the ceremony (which was, in theory, gay-free) the happy lesbian couple move into the apartment across Min-Soo’s.

In the meantime, Min-Soo’s life continues as it is except when his mother pops in for surprise house visits. When he’s not stressing over his mom finding out his marriage is a sham, he spends his free time at the local gay club, G-Voice, which is the house to every staple gay guy you could ever imagine, who spend their time nagging at Min-Soo for not inviting them to his fake wedding. Among store clerks, lawyers and store owners of all ages and sizes — including small-town guy Dae-geun nicknamed Tina (Park Jeong-pyo) who has a crush on him — Min-Soo meets the new bartender, Korean-American Seok (Song).

Though the movie is loads of fun at times — I found myself laughing out loud a few times, especially with “Top But Bottom” explanations — Two Weddings and a Funeral does have some pacing issues, but it never loses itself. It’s got the right amount of drama — remember, this is a South Korean drama and there is the word “funeral” in the title, so it does get quite tragic (almost shocking) at one point in the story, but it all ends quite happy with a musical number included! All four main leads do a remarkable job — even Jeong Ae-Yeon with limited screen time — but the stand-outs were Park Jeong-pyo’s Tina with the scene with his relative and his confession to Min-Soo, as well as Ryoo Hyoun-Kyoung, who reminded me a lot of Japanese actress Juri Ueno at times.

Two Weddings and a Funeral reminds us, though, that there are still so many things to go through before South Korean LGBT people can freely live their lives without being judged not only by society, but by those closest to them. Acceptance begins at home.

Get the DVD on YesAsia with English subtitles.