War of the Arrows 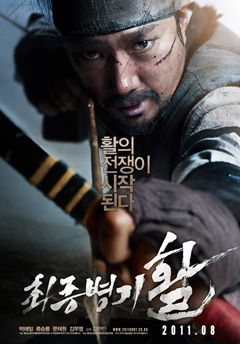 For the past few years, South Korea’s commercial cinema — similar to the its mainstream music — has been dishing some good quality products, and considering the Box Office success that War of the Arrows had last year, becoming the #1 ticket-seller, surpassing feel-good film of the year Sunny, is a feat in itself.

Set after the second Manchu invasion of the country (a bit after the 1630s), the film follows a pair of siblings, brother Nam-Yi (later played by Park H.I) and sister Ja-In (later played by newcomer Moon), as they lose their father to the King’s guards. After a close call, they manage to escape and begin living with their father’s best friend, Kim Moo-Sun (Lee K.Y), who takes them in as if they were his children.

Thirteen years pass by, and Nam-Yi becomes a skilled archer who must rescue his baby sister when, on the day of her wedding to long-time friend Seo-Goon (Kim M.Y), she (and other people) are taken by the Qing army, who also slaughtered some more at their passing.

Then it’s all about cunning against cunning, when Jyu Shin-Ta (Ryoo), discovers the skilled archer chasing them down.

Now, I gotta admit, though. War of the Arrows isn’t exactly thick in plot, this is a cat and mouse chase, and the weapon of choice are an archer and his arrows. However, the movie has some VERY exciting action sequences for the adrenaline lovers, all topped with great cinematography and wardrobe for the epic battle fans. If only there were Korean distribution companies scattered in other territories *cough* we could sprinkle some thrills into our Hollywood-filled movie theaters.

Park Hae-Il proves to be a very apt action star — dude, he’s like a historic Korean Hawkeye, blasting through chunks of trees that get in the way of his target. And Ryoo Seung-Ryong plays a great antagonist to his hero, which is always important to never seem too one-sided. Especially in this day and age when we look down on heroes with no flaws.

As far as international appeal goes, War of the Arrows is it. No awkward man-crying (I’ve seen that comment about Korean films floating around!), no melodrama, just a straight-forward “must save damsel in distress” story, which seems to get a lot of men pumped about it. This is as close as the great Hong Kong epic battle movies we were all used to, though this is no Red Cliff ;P But I have little doubt that South Korean cinema can reach that level of filmmaking.

The screening times for War of the Arrows at the 3rd Korean Film Festival in Australia are: