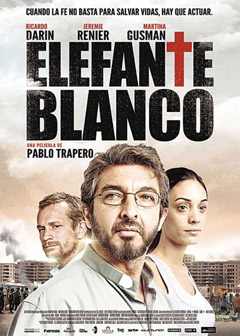 Back in the 1930s, the huge building known as Elefante Blanco (White Elephant) was supposed to be the biggest hospital ever in Latin America. However, the hospital — originally developed for Tuberculosis treatment — was never finished and the building was abandoned, only to be used later as a wrecked cathedral by the habitants of Villa Virgen in Argentina.

Pablo Trapero’s latest film, Elefante Blanco, follows Father Julián (Darín) and atheist social worker Luciana (Gusman) as they work hard to provide help and social assistance in Villa Virgen, whose inhabitants are ignored by the government and currently engaged in an ongoing drug war. Father Julián’s daily activities consists of praying sermons, keeping the young folks drug-free and disrupting conflict. But when he finds his life threatened by a brain tumor, Julián brings in Father Nicolás (Renier) to Villa Virgen and grooms him as his next successor.

As the movie progresses, conflicts between Julián and Nicolás show up regarding how they work. While Julián does his best to acheive a peaceful environment in order to gain political support for building a new hospital at the Villa, Nicolás prefers dealing with the crime lords directly — something Julián believes will make them combatants, and liable to be killed.

Elefante Blanco is interesting because of the enviornment where it takes place as well as tackling subjects such as marginalization, crime, corruption among policemen, hope and faith. It also boasts pretty good cinematography and solid performances from its main cast, especially Jérémie Renier, whose character greatly tackles his inner demons during the second half of the film. However, the biggest problem with Elefante Blanco is the focus.

What does Elefante Blanco really want to be? Is it a film about poverty and crime in a marignalized Argentina? A film about priests struggling with their lives and respective faiths? A film aiming for social commentary? Or is it a film showcasing hope and despair? The film tries to be all of that, yet it pulls them off in such a good, albeit uneven, fashion. The marginalization and tension within the population was showcased very well, and the setup for the film was pretty good early on. However, some aspects weren’t treated well, like Julián’s disease, which feels forgotten on occasion, or the cliché romance between Nicolás and Luciana which felt forced.

Though this might be comparable to City of God because of the scenario and the themes it portrays, Elefante Blanco,  despite its good elements, lacks the impact and emotion that Fernando Meirelles’ film had.