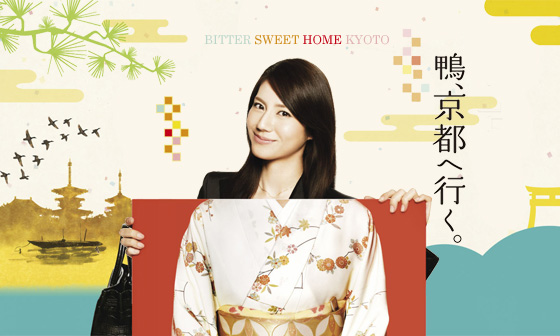 I’m always on the lookout for girly non-girly programming, especially in Japan, so when Shiina Ringo dropped her single [1] and I read the synopsis for Bitter Sweet Home Kyoto, I just couldn’t resist. I actually think the English title is much better than the Japanese one that basically says “Kamo Goes to Kyoto ~ The Diary of a High-class Inn Okami.” And that’s basically what the show is about- Kamo (Nao Matsushita) is a Kyoto woman who hates Kyoto’s hoity-toity attitude towards tradition, hence she left for Tokyo to never return again, and became a government official in the Finance Ministry.

Kamo is ruthless with budget cuts, but she doesn’t care when people yell at her or insult her because that’s her job (and she’s got a silver tongue) and no one is better than her at that. One day, she gets a phone call to inform her that her mother, the proprietress of the high-class Ueba-ya Inn, has passed away. With over 200 years of history, Ueba-ya Inn is deep in debt, but due to its valuable reputation, a conglomerate is hoping to acquire it. Up to the task is Kinugawa-san (Kippei Shiina), who believes convincing Kamo to sell Ueba-ya Inn to him will be a piece of cake.

However, Kamo takes it upon herself to disproof her mother’s words (“You wouldn’t be able to do it.“), and sets herself to become the new proprietress (or okami) of Ueba-ya against the wishes of the staff… head chef Hide (Koh Takasugi), and head waitresses Mariko-san (Rino Katase) and Sae-san (Keiko Horiuchi). It’s a tough road, but she counts with the help of Kyosuke-san (Shunsuke Daito) and the Umegaki-ya proprietress, Umegaki-san (Mayumi Wakamura)… or does she?

As you may or not know, I learned about the term “okami” through Osen, hence I will measure all okamis to the perfection that was Osen herself. Though Kamo isn’t as likable as Osen, and is VERY hard to like in the first three episodes, Nao Matsushita embodies the character to the best of her abilities. She tends to tower over other actresses, so it works when Kamo’s personality wants to overpower anyone, especially in her confrontations with head waitress Mariko-san, but that attitude may irk viewers. The best element in the first five episodes, however, it’s the financial play and what each of the characters is trying to do to one up each other. For being a member of the Finance Ministry, Kamo sure does seem sloppy at seeing other people’s financial plans, but that goes in hand with her bettering herself as an okami. She really wins you over.

Production quality is pretty good, not much emphasis on food but enough to get you hungry, while traditions weren’t as explored for a show about keeping traditions — usual suspects apply: importance of ingredients, kimono fabrics, proper way of making tofu, tea, and rakugo make an appearance. The importance of a bathtub experience was interesting, and the emphasis they put on ikebana and the meaning of flowers was a nice touch, especially by episode 10 that features Takashi Sasano who plays Minegishi-san, the caretaker of the inn, and the love of his life Haruko-san (Keiko Matsuzaka). However, I think Bitter Sweet Home Kyoto reaches its best emotional level on episode 9, when a couple arrives with a woman who’s had a stroke and can’t remember her husband who is by her side.

The plot in the show is very interwoven within each guest at the inn, so there isn’t really any filler content, and I’m so glad the content wasn’t focused on Kamo’s love life. One of my favorite elements was Mayumi Wakamura, that double-face proper okami. I loved her. She was so charmingly sweet, but damn! That scene on the final episode and that look she gave straight to the camera- it was award-winning.

Though the ending is a little too neat, Bitter Sweet Home Kyoto proves to be a nice watch.