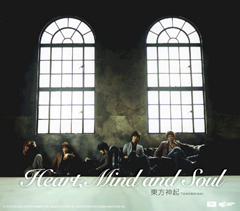 The next step in ensuring DBSK’s domination was introducing them to the Japanese market, a tactic that worked wonders for SM’s biggest seller BoA. However, DBSK had quite a hill to climb. If their foreign presence wasn’t enough to cause some side glances, surely their trouble with the sharper language caused some to drift away before they even sang their first song. After all, this is a Korean group parading themselves as a Jpop group. Going as Tohoshinki (or TVXQ) for Japanese promotions, they offered Heart, Mind and Soul.

The Japanese music industry was going through a collective shift. The pop market had found itself on the verge of extinction with the rise and domination of rock groups like L’arc-en-Ciel and the resurgence of Visual Kei with groups like The GazettE. But TVXQ managed to create music that was fresh, mature, and of a quality fans of the genre were sorely missing.

Holistically Heart, Mind and Soul is completely original material, Japanese lyrics and a Japanese staff working to produce the group’s debut. As with the dynamics of the language, the music hits harder, is sharper, and has a crystalline, almost icy finish that starkly differentiates this Jpop reincarnation from its Kpop origins.

Heart, Mind and Soul’s vocals are fresh, arrangements gutsy. From the start, the listener is almost jarred out of its apprehension. Much of the album borrows from 90s American and British R&B: smooth and raw vocals coupled with beat-driven arrangements. Opening track No Words Are Needed, a smooth, R&B-laced love song, sets the standard early. Tracks like My Destiny and Eternal highlight the group’s singular vocals, a trait the crosses over flawlessly.

Heart, Mind and Soul relies heavily on the chemistry between the members and their ability to produce harmonies second to none. The Japanese version of Hug is slightly less cloying than its predecessor, opening with a powerful a cappella chord and focusing less on the group’s precociousness. Though the softness of the Korean language suits the song better, the Japanese version allows the boys a chance to open up vocally.

The group’s maturity lends itself perfectly to Heart, Mind and Soul’s up-tempo numbers. Tracks like Break Up The Shell and the Japanese version of Rising Sun succeed because they break away from the “traditional” pop formula, being at once bolder in arrangement yet accessible to fans of the waning genre. Of course, nothing really beats the group’s flawless harmonization. A cappella versions of Stay With Me Tonight, Somebody To Love, and My Destiny close the album with a powerful statement: we’re here to take over.

Heart, Mind and Soul is quite a surprising listen. Even the Japanese version of songs I didn’t particularly care for on the Korean originals found sway with me, going from cavity-sweet ditties for teenyboppers to simply brilliantly constructed pop music. What worked in Korea works tenfold in Japan: near-perfect vocal timing and flawless arrangement and production. However, their debut in Japan gives us a peek into the group’s determination: mastering a language severely disparate to their own and taking on a market quickly on the downslide. With Heart, Mind and Soul, it’s almost a no brainer how these young men from Korea came to dominate the Japanese charts after a few short years.

You can listen to the album at Xiami. You can buy the album at YesAsia, Amazon (surprisingly, but a tad bit expensive), and CD Japan.