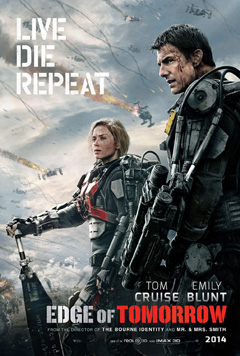 I’m starting to get a good feel of the movies I’m going to like just by their trailers [1], or so it seems from my enjoyment of Edge of Tomorrow, which has reinstated my faith in Emily Blunt after a few couple of weak years.

Invaded by aliens known as Mimics, Europe has almost been taken over, and even the Russian and Chinese armies are unable to advance much further. We are losing the war, and even Sargent Rita Vrataski (Blunt) -aka. The Full Metal Bitch- will be unable to stop the massacre where General Brigham (Gleeson) is taking them. Despite his lack of experience on the ground, Major William Cage (Cruise) is recruited against his will and taken to be part of the J Squad, who alongside the rest of the teams, will be ambushed and slaughtered time and time again as Cage gains the ability to reset and relive the day.

In the land of the blind the one-eyed man is king, they say. So in a mainstream Hollywood riddled with franchises, sequels, prequels and revamps, an adaptation of a Japanese light novel isn’t so bad. In fact, it’s kind of a welcomed change, despite that issue of white-wash and changing the protagonist to fit Tom Cruise. It works for those who (still) like Cruise, and it even might work for those who hate him with a passion. Crazy-eyed and all works for him here, just as it worked in Jack Reacher, and he even gets to be a bit incompetent for the first half of the film leaving the badass attitude to Blunt, who doesn’t just run around carrying Cruise’s spear [1]. Though I do admit that she does end up being part eye-candy, and it’s where Pacific Rim beats it.

Though Doug Liman’s war handheld type of camera makes sense for a movie like Edge of Tomorrow, it’s a complete disservice to the film in 3D. I would avoid the 3D (for all handheld), despite shots like the drop-off or the aliens coming at you. The amount of action and information-feeding during the film is A LOT, and it’s an added extra layer with the subtitles, but that’s territory coming by introducing a whole new world (or at least new creatures) from the get go, which left me wanting a prequel exploring Rita Vrataski’s rise to Full Metal fame with less information and deeper feelings.

That’s the thing- Edge of Tomorrow is a cool film that left me cold, unlike Source Code, I didn’t feel any deep connection to these characters despite wanting to do it. And just like that film, I felt that need for the bittersweet end that I didn’t get.