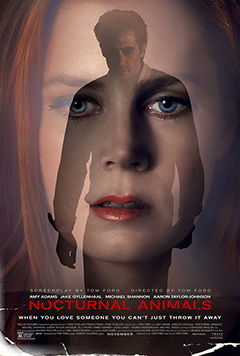 You know those films that you feel good about when you finish watching? Tom Ford’s follow-up to A Single Man isn’t one of them. It ends with one of the most devastating shots of the year, a close-up of Amy Adams’ face… just waiting. For many of those that loved Ford’s debut, this might be a tough sell as both are completely different films.

Based on the novel Tony and Susan by Austin Wright, Ford’s Nocturnal Animals follows the story of Susan Morrow (Adams), a fancy art gallery owner who’s going through a bit of a crisis with her husband, Hutton (Armie Hammer), when she gets a novel sent by her ex-husband, Edward (Gyllenhaal), which she reads over the weekend as her life -past and present- unravels. Expertly set up by Ford’s stylish mise-en-scène and, once again, accompanied by the eerily melancholic score by Abel Korzeniowski, the film is basically Amy Adams reading a book and imagining her ex-husband as the main character of his kitschy revenge novel.

That tale, of course, is a shift of gears of unsettling scene to unsettling scene— I’m usually not a big fan of Taylor-Johnson, but he plays an incredible creep here; and all of it bitterly reminded me of the “what’s a male to do” debate laid out by Julia Loktev’s The Loneliest Planet, in which a -supposedly- sensible man is put through a situation to test his manliness. In here, Gyllenhaal’s fictionalized Tony is asked whether or not he did enough to save his wife (Isla Fisher) and daughter (Ellie Bamber), by a detective (Shannon) that is ready to press his buttons.

Like Nicole Kidman, Adams’ eyes are currently one of the most expressive in the American industry; filling her coldly structured surroundings with yearning and hurt over the terrible decisions she’s made in the past. Her perfectly curated world of luxury and pretense, which she tried to escape as she tells her mother –played by Laura Linney– in what is probably one of the best scenes, begins crumbling down or perhaps never really existed. Linney’s character hits you right in the psychoanalysis, bluntly telling her daughter that eventually all women turn into their mothers, a realization that Susan keeps on trying to fight until the very end of the movie, in which she removes part of her make-up, pretending that she’s not pretentious at all.

Though Nocturnal Animals left me somewhat cold, its most important question asked to its audience was “what would you do?” Possibly requires second viewing~