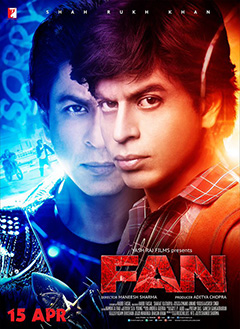 Though celebrity culture seems to be running rampant these days, it’s nothing new— the fans that committed suicide upon Lennon’s murder (and Chapman himself) [1], Jodie Foster’s fan who attempted to assassinate the president [1], Robert Hoskins who would either marry Madonna or slash her throat, fan club president and Selena murderer Yolanda Saldivar, Bjork-obsessed acid-letter-bomb sender Ricardo Lopez, and the fan whose father killed himself for the fan indifference of Andy Lau; celebrity worship has existed ever since the industry established the title.

So what better setting to explore celebrity worship in the nation that loves the cinema they produce and adores the stars it makes, who’s better than one of its biggest superstars? Even if Maneesh Sharma’s Fan might stink of the gross connotations of Darr, that included dances and songs upon the preying eyes of a stalker, it actually becomes Shahrukh Khan’s first film to lack a single song — despite the release of Jabra [MV] during promotions — as it decides to focus solely on that sickly relationship between sasaeng fan and idol without sugarcoating.

At its worst, it’s a nearly 2hr. version of Eminem’s ode to obsessive fandom and a massive ego stroke for Shahrukh Khan, but at its best it’s a psychological study of the mind of the celebrity obsessed. The film follows Gaurav (Khan with VFX and makeup by Greg Cannom), a 25-year-old who claims to have been made of the leftover clay that created his favorite superstar, Aryan (Khan in all his arm-spreading superstar glory). Prepping for Aryan’s birthday, Gaurav plans to follow his idol’s road to Mumbai step by step to meet him and declare his undying love. However, things turn for the worse when Aryan denies him 5min. of his life flexing his connection muscles, and his biggest fan becomes the enemy.

Longtime followers of SRK will enjoy the nudges to his earlier filmography, old interview snippets and award ceremonies footage, more so if they can quote word for word what their idol has said. In that sense, Gaurav’s devotion is theirs, and shows its most magical moment when he sees his idol in the flesh. The ocean of people waiting for him, cheering and chanting his name, as Gaurav’s eyes shine in that suspense of being noticed. It may not be the flashiest of Manu Anand’s cinematography (that’s at the end with the light decorations in the final showdown), but it’s one of the defining moments.

However, Fan devolves into a “catch me if you can” game, utilizing the work of stunt coordinator Oh-Sea Young, that even though adds sufficient thrills to the storyline, these scenes lose the exploration of the “hunter.” Despite that, I was still completely hooked to it, even if SRK has the worst suffering and lamenting scenes that made me chuckle. The end, though, it left me with a certain aftertaste. I still believe that we’re putting too much responsibility into celebrities’ hands; it should’ve simply had Gaurav committed to an institution or something.

I really need a Kpop version of this ASAP. SM, do something about it.