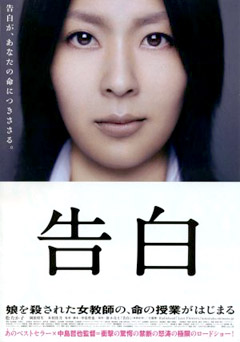 This movie not only left me mind-f*cked, it had me obsessing about human beings for like an hour. Funny thing is that I was crying foul after the screening of Caterpillar. I was beyond surprised that Caterpillar hadn’t been chosen as the Japanese representative for the Academy Awards, but after watching Confessions I totally understood why they chose it. It would have been better to send both according to me. [Amy: But that’s impossible] [Julyssa: I know, but a girl can dream right?]

Confessions tells the story of a high school teacher that loses her child. Seeing as she is a very smart woman, she comes to the conclusion that her daughter has been murdered by one of her students. This knowledge makes her seek revenge for her loss in the most gruesome way possible.

This movie is perfect, from cinematography to the sound design to the acting. Perfection in every frame. So perfect that it really makes you feel like a part of the movie, and so well edited that you never feel the shock coming. Because it was a major shock it makde you dwell into the depths of your darkness and realise that, perhaps, in the end we are all capable of anything, be it good or bad.

Before the film was shown, director Tetsuya Nakashima made a surprise visit. He had flown from Japan to be able to catch the last screening of his film. He told us to please not only concentrate on the plot of the film, but also the photography. He jokingly told us that not all Japanese are evil, and that out of ten Japanese you meet, at least one is going to be really nice.