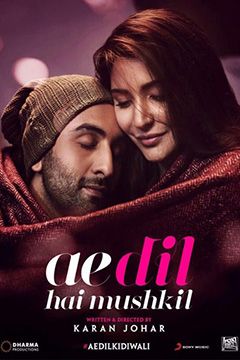 Karan Johar’s most recent feature length has just made it to screens in Peru, making it his second following My Name Is Khan, and marking the main cast debut on Peruvian (and Latin American?) screens. It’s important to note that the expansion of non-Hollywood mainstream films comes at a time when it’s increasingly important to dub content, unless there are extremely organized fanbases to give your film legs for a rare second week at the box office, which is a difficult goal when there are limited number of cinemas and screens for an increasing number of releases in a year.

Though initially sold as an Aishwarya Rai starrer, and she’s billed first as lead, Ae Dil Hai Mushkil centers around the life of popular singer songwriter Ayan Sangar (Kapoor), who is being interviewed about his talent with heartbreaking songs — like the one in the title — Saba Taliyar Khan (Rai), the poet behind his lyrics and the woman behind his heartbreak, Alizeh Khan (Sharma).

Johar still possesses his (and sometimes overindulgent) knack for self-reference, starting with Ayan introducing himself as Rahul (from KKHH) and even featuring the -now- iconic friend nose-flicking between Ayan and Alizeh, establishing them as instant friends by nature. The pair’s chemistry is unmatched by their love of filmi dialog, which is a cause of friction between Alizeh and Ayan’s current girlfriend, Lisa D’Souza (Lisa Haydon in her cameo), in a bizarre double date that also features Imran Abbas as Alizeh’s significant other. As the filmi muslim woman that she is, Alizeh doesn’t miss the chance to introduce herself as Khan, pointing out she’s not a terrorist. Of course.

Ae Dil Hai Mushkil continues developing in typical Johar fashion— there’s item songs that don’t do much to push the narrative — I’m not a fan of the dance EDM trend in most modern-set movies in Indian cinema– there’s even a disco number (The Breakup Song [clip] which features Alia Bhatt), trips to exotic locations [1] (though, for a reason) that features a scene of Ranbir playing his dad Rishi Kapoor in Chandni (80s sweater and all) and Anushka playing Sridevi in that yellow sari in Mitwa [clip] and even mocking the reality of the DDLJ (and many others) scene in the snow. However, as much as it is a typical Karan Johar movie, it’s also an improvement of characters— Anushka and Aishwarya seem more like real people, instead of archetypal tokens [the heroine, the best friend, the evil woman, Mother India]. For the last two or three years, mainstream Indian cinema has been doing a much better job at writing for its many actresses. There are still deficiencies, but the fact that Alizeh is allowed to have flaws that chain her down to her past –as good-looking as Fawad Khan may be– make her more real than any other love interest Johar has ever tried to flesh out. The conflict feels a lot more grounded and destroys you when the number for Channa Mereya [clip][translated lyrics]… which brings me to Ranbir. I’m generally not a big fan of his forlorn characters— his most celebrated, Rockstar, in which he also played an individual in love that had to endure heartbreak to find his inner artist is similar. His Ayan is more heartfelt and mature, not only by his own growth but also because he’s elevated by the quality of his co-stars’ characterization.

My biggest complain is that throughout the production, ADHM was constantly promoted as a Ranbir Kapoor and Aishwarya story, maybe to avoid the fact that Kapoor and Sharma’s then-recent release of Bombay Velvet was a big failure at the box office. Despite the fact that Rai in just a few key moments, she manages to break a few molds — +40 woman, divorced, involved with younger man, sexually active — however, it still shows that Indian cinema doesn’t know what to do with their +40-year-old “heroines,” especially if they’re not playing mothers to someone –sometimes– close to their age.

Despite all that, yup, Ae Dil Hai Mushkil is Karan Johar’s ode to True Love, the Friendzone. I liked it, I ate it up.

Note: You guys, Aishwarya is sexually active in the movie, though not explicit, don’t make it awkward by bringing your very young children. Last time, a three-year-old was bored out of her mind when her mother took her to watch Fan. LOL