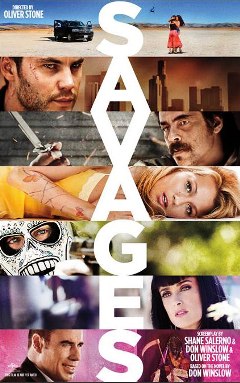 “Just because I’m telling you this story… doesn’t mean I’m alive at the end of it.”

In Savages, Ophelia (Lively) tells her story which involves her relationships with her best friends (and lovers) Ben (Johnson) and Chon (Kitsch). They are successful in the pot-growing business, which allowed the three of them to live a grand lifestyle in California.

However, when a business meeting between the guys and a Mexican cartel doesn’t go according to plan, O gets kidnapped. Ben and Chon change from entrepreneurs to crime lords in order to wage a rivalry with the cartel and rescue their girl before things get much worse.

Along with great, gory crime scenes and beautiful scenery that you would expect from Oliver Stone, Savages displays compelling and frustrating characters. Despite the very strong bond that the lead characters share, they are weak for the most part thanks to how they were written. Ben’s the peace-loving tree hugger, Chon is the muscle, and O happens to be the cute blonde girl that they share and love to death. While Aaron Johnson had a better defined character and performed his part well, I wished someone else could have played Chon instead of Taylor Kitsch, who did nothing special here. Even worse, Blake Lively’s poorly developed character, boring performance and constant narration of the story drags the film down. I often wondered what the fuck  Ben and Chon saw in O beyond her good looks and great sex.

Thankfully, Savages boasts strong performances from the supporting characters that are way more interesting to watch than the love triangle. John Travolta excelled in his short screen time as the corrupt DEA agent who helps Ben and Chon in their quest to rescue O. Benicio Del Toro was wonderfully loathsome as the murderous psychopath Lado, the chief enforcer from the Mexican cartel. But the best performance in Savages goes to Salma Hayek, who does a stellar performance as Elena, the Mexican cartel’s leader. She is ruthless in her business dealings, but also displays a soft side that wants to salvage her strained relationship with her daughter (Echeverria) at any cost.

Savages displays two ways of ending the film as every character joins in for the final showdown. One of them was a great way to wrap the film up, but the other one felt pretty anticlimactic. Despite the weak lead characters and quite messy screenplay dominating the film, I cannot deny how solid the supporting cast was. Del Toro, Travolta, Hayek and Demián Bichir, who plays one of Elena’s henchmen, deserve an extra half star for working on Savages.

P.S.: Uma Thurman was casted as O’s mom, but her scenes got cut from the theatrical release. What a shame because I would have loved to see Thurman on the big screen instead of watching an ending I didn’t like.