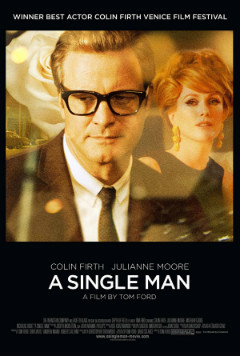 As far as debut films go, Tom Ford does a marvelous job – presenting a film full of emotion, lush coloring, and performances that truly inspire. A Single Man is a simple but powerful film about life, love, and loss.

The story revolves around George (Firth), an English professor from Los Angeles who has recently lost his life partner Jim (Goode) in a car accident. The film takes place over one day of George’s life, at the end of which he plans on taking his life — unable to bear living without the love of his life. On this day he plans on getting his affairs in order, preparing for his suicide with the utmost care and precision.

Throughout the day he has experiences with interesting characters including one of his students (Hoult), a male prostitute (Kortajarena), and his best friend and former lover (Moore). Alongside these meetings with people both old and new, George also reminisces on his past with Jim, including their first meeting, as well as a simple and romantic night at home. Through these many meetings and nostalgic moments, George questions whether or not his life would be worth continuing without Jim.

Although this is Tom Ford’s first leap from fashion to cinema, you can still feel the abundant feel of a designer in the film. A fair chunk of the film is shown with unsaturated colors to emphasize the lack of interest that George has in life, but each moment that he experiences an epiphany of sorts, the colors flow in flawlessly, creating aesthetically pleasing scenes for audiences. The raw feeling he gives many scenes — especially a tough one with Colin Firth in which his character receives notification of his partners death by phone — is truly impressive for a first time director, and he does a marvelous job at getting across many emotions, specifically grief.

The performances by the cast are out of this world, especially Firth who snagged an Academy Award nomination for his role as George. To my personal enjoyment, Colin Firth strayed from any and all stereotypes usually associated with homosexual characters to fit the time period and the character. Between Firth and Ford, we are given a fair view of a man whose sexuality is irrelevant to the way he lives his life. Matthew Goode plays his role as a loving partner beautifully and simply, making us really believe the romance between Jim and George. As George’s semi-supportive best friend Charley, Julianne Moore does a wonderful job. She plays a woman desperate for attention, but also manages to comfort George in the roughest of times. Hoult and Kortajarena both do an excellent job as well, delivering some lines and experiences that are particularly important to George’s day.

To say that A Single Man is a beautiful film is an understatement. Tom Ford successfully brings Isherwood’s novel to the big screen, and shows us just how hard it was to be a homosexual male in the sixties – especially one grieving the loss of the man he loved.