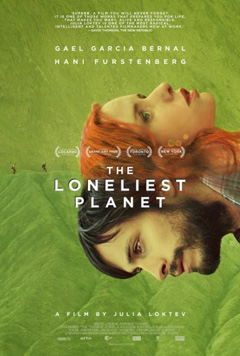 There are short stories that are better left as shorts. Slow-paced and full of silences, The Loneliest Planet follows a couple — free-spirited Nica (Furstenberg) and her accommodating boyfriend Alex (Bernal) — on their dream vacation in the wilderness of Euroasia, Georgia.

Director Julia Loktev seems to have gone on a trip with her leads, camera packed and no script to follow — to maybe the benefit of natural acting (?). One thing is certain, at moments, The Loneliest Planet is beautiful to watch, but those moments are so prolonged that they eventually lose their power and the movie loses you completely. By the time you reach the film’s 40th minute — not even close to half the film — nothing has happened yet, we aren’t even close to knowing anything substantial of the characters to care what happens to them by the second half of the film.

Couple’s bliss is also bad for interesting storytelling, there is absolutely no friction until the triggering moment, in which upon being pointed at with a rifle, Alex puts Nica to the front to shield himself until he regains his supposed “alpha” male senses and puts himself in front of her again. But even after that, nothing happens — they still walk, there is still maddening silence, and grandiose settings. They just aren’t as happy — having sex and cuddling half-naked — as they were in the first half.

The final happening in The Loneliest Planet is, of course, the sudden “alpha” male fizzle between Nica and their Georgian guide, Dato (Bidzina Gujabidze), which leaves us with the interesting question: “Do women want to be equal to men, but at the same time be saved by them?” — That is, if you make it to the end of the film without falling asleep. Did Nica expect to be as free-spirited and independent and still expect Alex to shield her?

In the end, The Loneliest Planet is probably one of the most boring movies I’ve seen released last year. I think it would have worked more efficiently as a 40-minute short (or even 30 minutes), instead of a nearly 2-hour film that seemed to be never-ending. Despite its actors, the story is pretty much a one-note thrill.