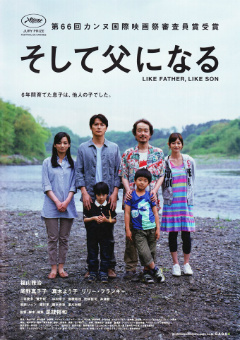 Of all the films that the Lima Film Festival had to offer this year, Koreeda’s latest was one of the very few I really wanted to see — (it’s also the only one I was able to see). I’ll confess that I’ve never seen any of Koreeda’s films before, but I’ll try to change that when I can. I’ll start off saying that Like Father, Like Son quickly shot into my Top 3 of 2013 films.

We got off to a chuckle-worthy start at the cinema in my country when 6-year-old Keita Nonomiya (Ninomiya) revealed that his birthday is on July 28th (Peru’s Independence Day) during an interview to enroll on first grade. Little Keita lives a great high-class life with workaholic father Ryota (Fukuyama) and loving mom Midori (Ono). Life is grand for them on many ways, despite the father’s often absence due to his job.

One day, the public hospital in which Keita was born reveals to the Nonomiyas that they screwed up big time, and there was an accidental baby-switch when Keita was born, involving the Saiki family; father Yudai (Franky), mother Yukari (Maki), and their 6-year-old son Ryusei (Hwang), all of them also unaware of the situation. Unlike the Nonomiyas, the Saikis aren’t well-off, but they are a very loving unit that manages to have some great family time with their three kids despite their economic situation. As per recommendation of the hospital, the children-switch has to happen as soon as possible before school season begins. However, that’s not an easy decision for both families to make.

While this messy situation ends up affecting everyone involved, Like Father, Like Son comes across as a character study film on Ryota Nonomiya for the most part, and he’s interesting to observe. He’s a man driven by perfection, privilege, pride, lineage and reserved emotions. His entire world turns into hell and everyone suffers with the same issue, but he’s the one who is shown being frustrated with it the most. As if the accident wasn’t bad enough, he was already having family issues (his differences with his relatives and his direct family), and he doesn’t really get along well with the Saikis at all, unlike his wife and Keita. We see his relationship with Midori getting strained due to her birth delivery, opinions and life choices, as well as his work keeping him away from his family.

The cast is excellent (child actors included), especially Fukuyama and Franky who had the more showier roles, and both are Oscar-worthy, if I may say so. The female cast were great too, but they don’t get to shine as much as the men — yet Ono edges out Maki since she has more screentime as Ryota’s wife and her mourning scenes are touching. While Fukuyama carried most of the film with ease through a very complicated character, Franky provided a lot of comedy relief effortlessly in a pretty drama-heavy movie that packs a lot of tension in terms of “when will the kids learn the truth,” as well as taking an emotional toll on every character.

Koreeda’s direction and screenwriting is top-notch, portraying a realistically grounded film with real characters that are actually interesting to watch. He also asks us pretty tough questions throughout the film. What would you do if this kind of mess (albeit very unlikely) happened to you? How would you feel about having a new family member at the expense of switching one of your own? Can you get along with the other family? I personally wouldn’t want to answer any of these or go through something like this.

My only problem with Like Father, Like Son is the explaining of the mistake towards both families. We needed to see why this happened, but the way it was presented came across as a bit distracting from the on-going drama. It’s sad that this happened to these families, but this went nowhere for the most part of the film.

Also, I really wonder if this could be re-adapted in other countries. I consider that pretty tough and not only from the casting aspect (in terms of semi-look-a-likes for the kids), but depending on the region it could involve other complicated factors. Nonetheless, Koreeda’s outstanding story and the cast’s solid acting puts Like Father, Like Son on the high-end of 2013 films.