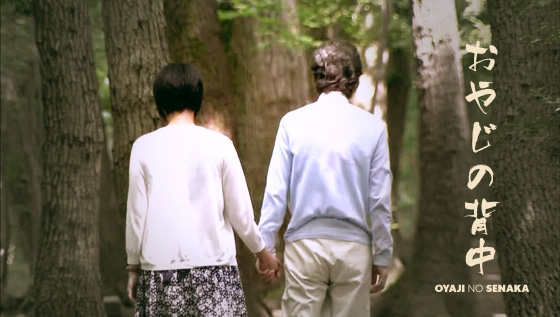 I’m taking over this review as it seems appropriate now that I’m commemorating the first year of my father’s passing this week [1][2].

Oyaji no Senaka is a 10-episode series anthology focusing on fathers’ relationships with their children and families, written and directed by ten different teams of creatives — which also included Yuji Sakamoto (famed for being one of the writers adapting Crying Out Love, in the Center of the World) — and featuring ten different sets of actors that included Takako Matsu (Confessions), Hikari Mitsushima, Koji Yakusho, Tomosaka Rie, Machiko Ono (!!), Ken Watanabe (!!!), Kimiko Yo… as well as Toshiyuki Nishida, Tae Kimura, Mikako Ichikawa, and Yuki Saori, all of whom feature on ep03 titled Nagori-Yuki.

There’s a certain beauty in the production of Oyaji no Senaka in that it’s a one-shot series of different people telling distinct stories that have little relation, however, these stories deal with the relationships these characters do have with each other. In the first one, it follows a father’s (Masakazu Tamura) caring bond with his daughter (Matsu) with a severe trauma. The second one is about a boxing daughter’s (Mitsushima) relationship with her unruly father who refuses to give up on her, while the fourth one focuses on a son’s relationship with his distant father. Worrisome, carefree, misunderstood, fearless and… sometimes lonely; the series is designed, obviously, to pull at your heart strings, though it’s never devoid of light moments especially in episodes 02 (Wedding Match), 03, 05 (Dobuko), and 07 (Nice to Meet You, Son), which feature wonderful moments with Mitsushima and Yakusho boxing to their hearts content, Horikita Maki playing a cop who has a perennial-TV-bad-guy of a dad, and a lovely quarrel between Kimiko Yo and Ken Watanabe.

Though an anthology project obviously has its faults, because one can never EVER like every single “short” as favorites always play a role. The most interesting one, for me, was the second one (Mitsushima reasons aside) because it showed a bit of an unconventional relationship between father and child that — I gotta admit — moved me the most. It’s as wonderfully acted as Watanabe’s, Nishida’s or Jun Kunimura’s roles, but it’s got the boxing setting that sets it apart from the rest. It’s a great stand-alone episode, even though I could never believe Mitsushima could be a boxer… I liked her energy and enthusiasm opposite Yakusho’s own. The episode goes great as a double feature with the fifth episode, which has made me realize I’ve warmed up to Horikita Maki.

Overall, though, Oyaji no Senaka doesn’t boast as much creative freedom as, let’s say- Camouflage or Juri Ueno and the 5 Bags, after all, its theme is a lot more conventional, but it’s able to explore different feelings from an interesting perspective that a one-linear-story regular series would, with some honest acting.