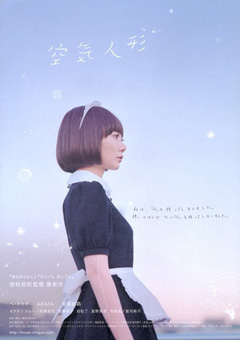 Another movie putting the spotlight on one of Japan’s seemingly growing issues, the amount of loneliness and isolation among the population.

This time we are forced to witness the issues through the eyes of a sex air doll (Doona Bae). One day, “Nozomi” wakes up from being just a mere plastic sexual toy to become a human-like doll that seems to have found a heart.

We get to follow her in her explorations of the world, but mostly about what makes us human, if there is something that does.

This movie is beautiful in the most painful way. It hurt to watch because of all the sadness even though there were some funny moments. It is a beautifully done observation about human kind and its darkest notions.

I don’t know what more I can say about this movie to do it justice with just words. I was very much affected and I look forward to seeing more movies from this director.