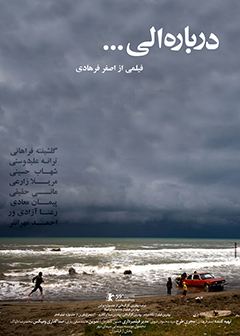 Back in 2012, Asghar Farhadi won Iran its first Academy Award (and thus became the first Iranian to do so) for his divorce drama A Separation, which he tried to replicate with The Past (Le Passé). Their first try came about in 2009 when Iran sent his fourth feature About Elly, which tells another seemingly pedestrian story of a friends and family weekend going completely awry.

Sepideh (Farahani) is an eager young woman who seems to have the habit of telling small lies to have things go the way she wants. On her weekend with husband Amir (Haghighi), Naazi (Azadivar) and her husband Peyman (Moaadi), Shonreh (Zarei) and her husband Manouchehr (Mehranfar), all their children, and their recently-divorced friend Ahmad (Hosseini), for whom she has especially invited Elly (Alidoosti), everything that can go wrong goes worse.

From what little I’ve seen from Farhadi, he seems to take simple family dramas and explore cultural perception of what the western audience thinks Iran is or should be. His thematic takes melodrama (which the director can be accused of) and  gives it a cinematic aesthetic- the acting is great and definitely elevates the film’s possible mystery soap opera plot, which builds up to the final moment of disappearance. I kept asking “why does Sepideh want Elly to stay so badly?” “why does Elly want to go away so badly?” It all collapses as the castle of cards can’t hold itself any longer from all the lying.

Though About Elly works as an ensemble piece, Golshifteh Farahani has a little more lifting to do as the often hated Sepideh, the mind behind all this unfortunate event. Her scenes with pal Ahmad, Elly and her husband are the most relevant to the plot, either by building the story or disentangling it — and I’m not discussing major points of the story because there’s nothing that spoils a mystery the most than a film review with spoilers. The tension reaches boiling point in the confrontation with Amir, the acting is intense and tests the viewer. Though I must admit the most challenging scene is probably the one shot in the water, managing to capture the stress and chaos of the brief but significant moment.

Overall, Farhadi’s film is more intriguing than thrilling… but that might just work. If you’ve seen the film, tell me- did she or didn’t she?

The film just opened at the Landmark‘s Opera Plaza Cinema in San Francisco, Landmark’s Shattuck Cinemas in Berkeley, and Camera 3 in San Jose.