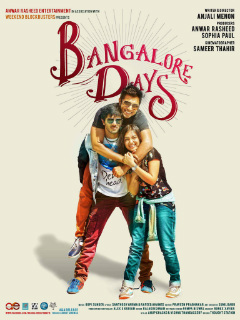 “Growing up is losing some illusions, in order to acquire others.” Though that is not often what we see on films, where we often meet inspiring characters born with unique (hidden or newly discovered) talents with big dreams that achieve unbelievable things by overcoming great obstacles, very few show the struggles of common people dealing with the small disillusions of life. The few that come to mind of the last couple of years are Sunny and Gf*Bf, in which group of friends grow apart and end up having different levels of success and problems.

In Menon’s Bangalore Days, we begin with Divya’s (Nazim) graduating big-dream speech of completing her MBA and having a company of her own that will change the way women are treated in the labor force in India, only to be told by the family’s astrologer that all will be over — meaning, she will never get hitched — if she doesn’t get married in a two-month period. Big dreams pushed aside, her parents introduce her to the corporate executive Das (Faasil) who discloses that he’s just gotten out of a relationship and that he isn’t sure about this marriage either. Bonding over their doubt and poorly prepared sweets, the both of them accept to get married to the surprised reaction of Divya’s two cousins, software engineer Kuttan (Pauly) and troublemaker Arjun (Salmaan).

These close trio end up leaving their hometown of Kerala and move to Bangalore for the big city life, Divya as a housewife of a man who is a workaholic, Kuttan homesick with a job that he’s lukewarm about, and Arjun with a job as a motorcycle mechanic. Though many films have portrayed the modern (late) coming of age struggles of middle-income youths, in a similar way that Ayan Mukerji’s Wake Up Sid dealt with a young man’s finding passion for his work and bond with his mother, the strength of Bangalore Days lies on its well developed story and characters… even DJ Sarah (Menon), who is later introduced as a love interest for Arjun, gets a decent developing despite the amount of characters and relatively short running time. There are films that have a fraction of the characters, yet never become more than what is written. A big shout out for some really fresh acting in there.

Though there are moments in the story, where it looks like it might reach cliché territory (Das’ backstory or Kuttan’s love story), it never settles on it. However, I did kinda felt bad for Kuttan’s mother (Kalpana) and how overbearing she turned out to be, despite some of her most eccentric qualities. I also don’t feel 100% sure on the resolution between Arjun and Sarah, it feels too much like a perfect ending and he gets everything he wants without much of a struggle. Instead of a “Don’t go,” I would have preferred a “Where you go, I will try to follow.” Why do women have to make all the sacrifices?

Bangalore Days is a nearly three hour long non-dramatic movie with only a couple of songs not really focus solely on romance, but with great direction from Menon maintaining great pace, it makes it a ride so worth your while. Looking forward to exploring her filmography.