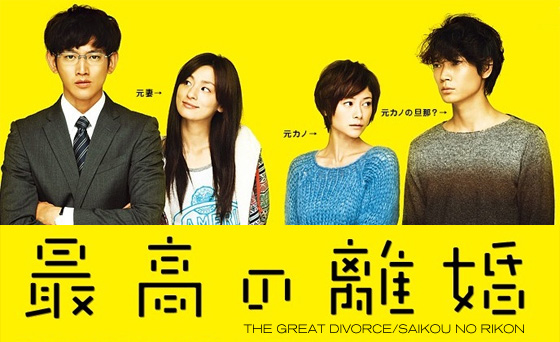 Japanese drama tackled modern day divorce in The Great Divorce (aka. Matrimonial Chaos or simply known by its Japanese romanization Saikou no Rikon) when we are introduced to Mitsuo (Eita), a simple salaryman who has been married for the past two years to Yuka (Machiko Ono). Though they married for love, the honeymoon bliss has dissipated to the despair of Mitsuo who finds every little detail about Yuka irritating- how she leaves the bathroom dirty, her long hair on their comb, takes ages to get up from bed, never makes breakfast and doesn’t have time to attend the apartment they live in. Yuka is carefree and doesn’t get too irritated with Mitsuo’s uptight character and borderline OCD because “when women fall in love, they end up forgiving all their faults…”

Men are the opposite. When they fall in love, they begin searching for the woman’s faults.

And so as the last drop of water overflows the cup of Mitsuo’s patience, he prints the divorce papers. Though Yuka seems to not want to give in at first, she finally does and grants Mitsuo his “freedom” in time when he encounters a friend from his past, Akari (Maki Yoko). The thing about divorces in Asia is that… unlike Western couples who just usually get marry to each other, Asians have to get marry to whole families. So when Yuka does deliver the divorce papers, Mitsuo and her are unable to tell their families about it, instead they decide to ease them all into the situation, resulting in them having to pretend to be married while in their separation process.

The results? Behind all this drama, there’s a little bit of earnest laughs especially given by Machiko Ono who delivers a stellar balanced performance full of quirky warmth (her character, after all, is born under Mt. Fuji, no?) and tons of dramatic scenes, especially on her speech on Episode 4 and her solemn departure letter on Episode 7.

Eita’s character also has his moments among all the blunt honesty, which makes him even confess that he hates cherry blossoms (who does?), like Mitsuo’s love for animals. Though Mitsuo does seem to disregard those around him, taking them for granted- like thinking of his bonsai tree after a quake instead of Yuka. Even though it was funny, you kind of see Yuka’s point on that one. In the end, Mitsuo’s best scenes always involve Yuka, especially that segment when he opens a Facebook account and both of them start teasing each other fronting with pictures of their dates.

What I didn’t like about The Great Divorce, however, isn’t so much Akari’s inclusion as it is her relationship with Uehara (Gou Ayano), which is kind of interesting up until the point when they turn Uehara into a sort of martyr with his backstory. So he’s not a jackass, he’s just a suffering soul, right? Uehara, with all his charm to lure women, isn’t a bad guy- he’s just absent-minded in the beginning, disregarding the people that care for him because… he doesn’t think he deserves happiness. Gou Ayano is a fine actor, it’s just that Uehara is a poor character and the only hindrance in a perfectly neat show.

If only they hadn’t fall into that girl trap.