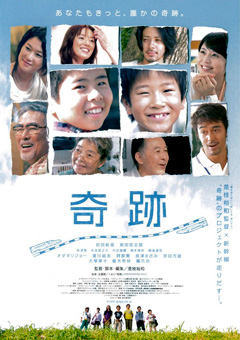 Hirokazu Koreeda is one of my favorite filmmakers since I first laid eyes on his heart-wrenching family drama Nobody Knows back in 2004. However, not since then has Koreeda developed a story carried on by children. In the case of Nobody Knows, Koreeda found Yuya Yagira to debut, and in the case of Kiseki, he found brothers Koki and Oshiro Maeda.

But, oh boy, these films are nothing alike. Kiseki is the complete opposite to anything that Koreeda has ever done. Don’t get mistaken, he is still minimalist and takes some of the most pedestrian topics to develop into films, in Kiseki (which literally means Miracle) he follows the adventure of a broken family — the recently divorced Kenji Kinami (Odagiri) and Nozomi Oozako (Otsuka). The two have gone their separate ways, each taking one of their two kids: elder brother Goichi (Koki M.) going with his mother — or as near as it can be to —  Sakura-jima [1] and her ash-spewing volcano, and Ryonosuke (Oshiro M.) going with his carefree father, who’s trying to make it big as an indie musician.

At their respective new homes, the boys communicate through long-distance cellphone calls, trying to live through their parents’ divorce, though elder Goichi seems to be having a lot more trouble moving on than his little brother, who seems more concerned about growing his vegetables while living a healthy and carefree life with his new friends. At school, however, Goichi hears that there’s a way for dreams to come true, and he sets out with his friends to make their wishes a reality.

A kid with a broken family that wishes to mend it. Can’t really get any simpler than that. We then meet colorful children with their own wishes, extended family members that make the picture even more colorful, and some cameos — but what Japanese movie doesn’t have them? In here, we have Masami Nagasawa playing an object of desire school librarian — doing what she does best, acting like she doesn’t know we’re looking at her legs — Hiroshi Abe playing a blunt teacher, and Kirin Kiki as a hula-loving grandmother living with Goichi — the last two worked with Koreeda on yet another simple family drama Aruitemo Still Walking. Pay attention to the hula-dancing introduction with Kirin Kiki, it’s hilarious.

You may think this description sounds horrible, but Kiseki is far from that. Koreeda is a master at showing life, even if it’s through the generic acoustic pop folk guitar soundtrack — his characters have their own magic, they’re alive. I personally loved the little brother, played by Oshiro Maeda. He somehow reminded me a lot of my cousin with his mischievous face and gentle nature. His innocence seemed to shine through in great contrast to his elder brother Koki, but they both held their own. Instead of the backbone, they’re the spirit of the film, put together in such a way that it takes you back to your childhood (or boyhood, if you wish).

When you were that innocent, what were the things you wished for?