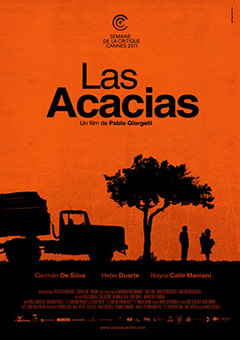 Las Acacias is a light drama that focuses on a truck driver named Ruben (de Silva), who is told to give Jacinta (Duarte) a lift from Paraguay to Buenos Aires. Unbeknownst to him, Jacinta is bringing her baby daughter, Anahi (Mamani), with her.

And so the atypical road movie began.

What’s so amazing about it is that there’s so much to it with so little going on. Ruben is kind of grouchy, keeps to himself, and is definitely not so sure about doing this favor… even if  his boss is the one ordering him to. When he meets Jacinta and baby Anahi for the first time, Ruben doesn’t really want them there.

That’s it! Take a road movie and throw in a baby, and chaos could ensue… except it doesn’t here. Ruben doesn’t like babies — I think a vast majority of non-parents can relate to that — or at least doesn’t seem to warm up easily with this particular baby.

We don’t get to know much about Jacinta other than her purpose and that she’s there with her baby, yet the setup to Ruben’s character is so smooth that we already feel like we’re the truck drivers in the story. We see him warm up to both his truck guests just as we warm up to them — if we didn’t find baby Anahi cute at the beginning, we started to fall for her baby charms…

Las Acacias easily makes us feel like we already know these people personally. The fluidity of how we move from scene to scene like we’re part of this road movie is what probably got director Girogelli the three important awards at Cannes: La Semaine de la Critique, in which the film got the Young Critics Award, the Golden Camera, and the ACID Award, given by a jury of directors.

Though the film is carried by German de Silva and his blossoming possible interest in Hebe Duarte’s character, it is baby Nayra who steals the film. I’m serious, guys. Baby Nayra should be nominated for an Oscar already. Best Supporting Actress. Whenever we had Baby Anahi on scene, she floored Ruben and their budding relationship was forged… maybe filling a void in Ruben’s life.