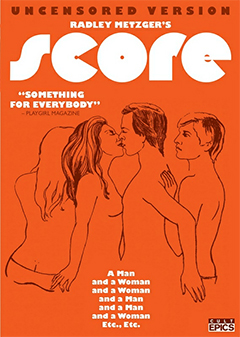 It’s not often one gets the chance to discuss pornography, so I’m going to go ahead and take full advantage of your time by explaining just why Radley Metzger’s Score is one of the most progressive and interesting classic films I’ve ever seen.

This saucy seventies flick follows a swinging married couple who spend their days lounging around the villa making bets and having sex. One weekend, they turn their sights on a couple of naive newlyweds and bet on whether or not they can seduce the two. Their small get together turns into a night of secrets, seduction, and sexual discovery like no other.

While softcore was widely acceptable, Score takes things to a new level by featuring more explicit sex scenes than what was normal for the time. Radley Metzger, one of the lead directors of the porn chic era, really doesn’t hold back on any front with this film. The production value is impressive and every minute is stunningly shot and executed. Whether the cast is simply talking or engaging in intercourse, one will be sure to find each scene visually appealing. Metzger’s camera work takes advantage of the set design, exploring every nook and cranny he can find to angle his shots in interesting ways. His use of mirrors is impressive, especially during the climax (pun intended) of the film.

Jerry Douglas’ writing for this movie rivals the wit of any non-porn comedy, and frankly beats most of them to death. One liners and sexual innuendos fill this script, along with plenty of recurring lines that will be sure to please those actually paying attention. One might be surprised at the lack of sex in this for being an adult film, but the movie truly relies on Douglas and his writing to keep the sexual tension rising. Metzger’s other films, notably The Opening of Misty Beethoven, also mix comedy with sex in impressive ways. They always utilize wordplay to twist things that one might find offensive into something humorous, and Score in particular does a fine job of toying with the standards of sexuality, which is one thing that most films nowadays just can’t seem to do.

The lines between heterosexuality, homosexuality, and bisexuality are entirely blurred here. Rather than set us up with characters that are simply straight, gay, or lesbian, there is a wide spectrum of sexuality at hand. Elvira and Jack depict bisexuality perfectly as a swingers couple, having sex with each other as well as members of the same sex. When it comes to our naive newlyweds, Eddie is clearly a closeted homosexual and Betsy undoubtedly wants to be more than friends with Elvira while still maintaining an interest for the men in her life. Our swingers allow these young partners to achieve a sexual liberation — regardless of sexuality — that is sadly something one likely won’t find in their average film.

For all the talk about sex and being an adult film, Score is actually a fairly tame skin flick. A large chunk of its hour and a half length is dedicated to building the sexual tension while providing comic relief for its audience. The cast might parade around in sexy costumes — sailors, cowboys, nuns, oh my — for a while, but when it comes down to it, there are only two sex scenes. One is a short heterosexual sex scene towards the start, likely a tactic to keep audiences who entered the theater for sex interested in the unfolding story, and the other is something really wild. In an impressive dual sex scene, we have the gay couple in the basement and the lesbian couple on the second floor — each one going at it with all the passion in the world.