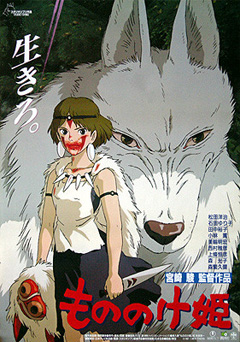 Princess Mononoke is one of Hayao Miyazaki’s most ambitious and most serious films to date — it’s even a little scary at times, and it doesn’t have any cute characters while dealing with some pretty heavy-handed themes.

It tells the story of Ashitaka (Matsuda) a man cursed by a wild boar God turned into an evil spirit driven by hatred. In his search for a way to relief himself from this curse that is affecting his arm and spreading rapidly, he heads towards the west where it is said the wild boar was killed.

In there he meets Lady Eboshi (Tanaka), who leads her town prospering at the expense of the forest making guns and forging iron, and trying to stand their ground against San (Ishida), known as Princess Mononoke, who’s lived and grown in a pack of wolf gods.

The animation in each frame of this is breathtaking, marveling us with its views of the forest and the magical creatures in it. But what’s always amazing about Studio Ghibli films is that no character is truly evil, which makes for some complex inner-debate.

We are Ashitaka in a way, first meeting Lady Eboshi and knowing what she’s been doing, but also getting to know the people that work with her and what Lady Eboshi does for these people. Then we’re on San’s side, and we get to know her and her mother wolf — overzealous and protective of the daughter that’s not her daughter. As both sides want to get rid of the other, Ashitaka wonders why it’s not possible to live side by side — this is, of course, a question that is still going on.

Each one of the characters are trying to do right by them, except for Ashitaka — but he’s curse since the beginning of the film, so we can argue that he’s got nothing to lose. San is only trying to save the forest which she inhabits with her family, fighting fire with… well, wolf attacks and daggers, but she’s enough of a threat to the community. This only makes them fight more and more, and the cycle goes on and on. Miyazaki’s message is clear and loud — let’s leave each other alone.

The best scene in Princess Mononoke has to be the resolution in which on the brink of a forest apocalypses, everything seeming lost, Miyazaki gives us the message that from death and destruction, life will rise again once we set things right.