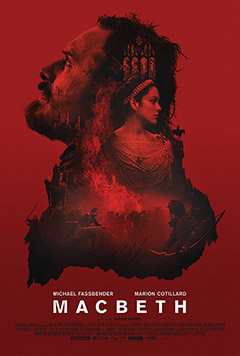 Let’s start this off by saying that Kurzel’s Macbeth may be one of the most beautifully photographed films of the year, courtesy of cinematographer Adam Arkapaw who’s in charge of Kurzel’s Assassin’s Creed, which will hit screens next year.

The question in everyone’s minds is whether or not we needed yet another adaptation of one of Shakespeare’s most famous plays— maybe we didn’t, but if you’re neither a hardcore fan of the play and are in need of some “serious” cinema, you might find elements to love here. For those unfamiliar with the basics of the story, it’s about the title character, Macbeth (Fassbender), who hears prophecies of him becoming Thane of Cawdor and future King, so upon the persuasion of his wife, Lady Macbeth (Cotillard), he bathes in the blood of those standing in his way.

This latest adaptation’s production design and cinematography give it its larger than life cinematic scale with slow-motion battles permeated with the eerie mist of the ferocious Scottish warring scenes, which are its best moments whether they’re oversaturated oranges or desaturated grays and greens. Dialogues, on the other hand, ground its characters in their theatrical background with dense text for a film. I usually don’t do this, even though actors mumble a lot, but I made sure I used the subtitles. Moreover, with heavy accents for everyone around except both leads, it makes it an uneven exercise on listening. Are they Scottish or are they not?

Having said that, I thought Fassbender was pretty great in the role of the mad man that he becomes throughout, with that intensity and severe tortured soul which he’s known for. Though I expected Cotillard to have a stronger character because other versions of Lady Macbeth have tended to be forces to be reckoned with. In here, she sure pushes her husband to murder and tries to keep him sane when he starts seeing his ghostly visions, but she just sorta withers away. But if I have to be completely fair and raged on Narcos‘ use of a completely wrong Spanish accent, then I have to hold these two accountable for theirs.

Definitely not for everyone, but a stunning visual experience best seen on a large screen it is~

Best watched with CC on!