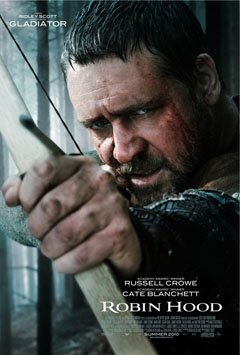 This year’s Robin Hood starring Russell Crowe and Cate Blanchett, directed by Ridley Scott tells “the story behind the legend” as they put it, by having Robin returning from the crusades led by King Richard “The Lionheart,” who has perished in battle.

Back in England, the newly-crowned King John is on the verge of civil war, and a possible French invasion.

It’s a fight for FREEDOM!

The story tries to present a lot, from having Robin in the army with his mates, to the return, and his meeting with Lady Marion and Sir Loxley. The plots against the loser King John… more than halfway into the film, you feel like you have seen very little. It’s not really boring, it’s just weird, if you think about it. Spending so much time showing you stuff, and feeling like nothing has happened.

The art direction is particularly good… all from set design, to wardrobe. It’s pretty impressive that way. However, I wished there had been more blood in the battle scenes, but I understand that they wanted to keep it PG-13… even though I doubt any young people would be attracted to a film with Crowe and Blanchett, over the pleasing Iron Man 2 with Downey Jr. After all, Robin Hood is a pretty gloomy affair… so maybe it could have been made as a Rated-R film, and no one would have said anything.

The fact is Robin Hood is a summer blockbuster film, so it’s neither a success nor a stink… but if you’re willing to get past all the wacky history, making fun of Gladiator, Russell Crowe growl… then, why not?