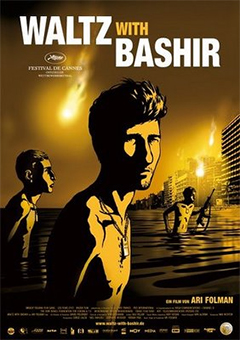 The idea that our memories aren’t truly our own or that we only remember fragments of the lives that pass us by is a scary one. No one likes to be confronted with a concept liked this, and yet there are many who have it far worse.

For soldiers, the mess that is memory is a battlefield of its own. Ari Folman, with his impressive film Waltz with Bashir, melds together documentary and narrative in order to present this disassociation between memory and reality for veterans long after the war.

An autobiographical tale of sorts, Waltz with Bashir deals with Folman attempting to piece together memories from his years in the 1982 Lebanon War. Throughout, he interviews friends and strangers, all of whom were also involved in the war, mixing it in with reenactments. However, there’s something particularly special about the way he presents all of this material.

That special touch is animation. The minimalistic nature of the animation isn’t always appealing to the eye, but it provides a fascinating touch to some of the stories and sequences told in the film, notably in the way the dream sequences are framed. In no way could a live-action documentary have a young man laying across a giant naked woman swimming across the ocean, but here you have it.

War is always a gritty subject to tackle and animation allows for a different lens than live-action. There’s a certain desensitized angle that comes with watching animated people die rather than watching real men die, but it also allows Folman to circumvent any melodrama and deliver the punches that are really necessary.

The scene in which Waltz with Bashir takes its title from is one of those particular scenes. One lone soldier dances across a small area, shooting the air and his enemies with his weapon as the poster of Bashir Gemayel hangs over him, all to the tune of Chopin’s Waltz in C-sharp minor, is inspiring to watch. It’s impossible to believe anything this beautiful could ever happen in the face of war, in the face of desperation, and yet this is the way one of Folman’s interviewees remembers it. Thus, this is the way that he presents it.

We relive and tell history through our memories of what happened, but what if our memories can’t be trusted? Just as memories come it bits and pieces, Waltz with Bashir lacks some structure that could have left it a bit less choppy, but it’s nothing that can’t be overlooked in light of what it deals with.

Waltz with Bashir is ultimately an examination of post-traumatic stress disorder and the effect it has on the memories and stability of veterans, but it is also a chance for these interviewees to rebuild their memory together. Part of the journey of making this film brought new light to memories from Ari Folman’s past, just as he brings new light and a new perspective to events for others like him, in addition to the average audience who may be clueless about this history.