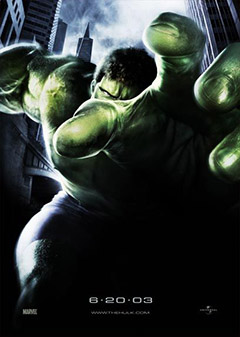 I’m gonna be honest with you, Ang Lee’s Hulk is one of those movies that you can’t just pick up whenever it’s playing on TV. You have to plan to sit down and watch it, and I guess that is not exactly the best thing to do with a superhero whose hook is “Hulk Smash!” But I really dig it.

Bruce Banner (Bana) and Betty Ross (Connelly) are working on scientific research with nanomeds and gamma rays in order to allow the body to heal itself in the case of injure, and as origin stories go, a lab incident exposes Banner to dangerous levels of gamma that would eventually unleash a mutation inside him that turns him big and green whenever he gets angry. Hulk is the movie that tries to explain the complex process of the mind and the id.

In this failed attempt to jump start The Hulk on its own franchise, Ang Lee attempts to work as outside of the box from what has become the custom for blockbuster superhero movies by creating an eclectic amalgamation of somber atmosphere by exploring the pathos of Bruce Banner’s messed up collective unconscious — and boy do Bruce and Betty have daddy issues (played by Nick Nolte and Sam Elliott) — and it juxtaposes it with comic book elements, such as the visuals and typographical elements… and the sometimes quite effective editing. Even Danny Elfman’s score seems like pastiches of everything that totally throws you off. It’s even more noticeable with the percussion during the scene where they’re transporting Bruce to the military facility, but other than that, I enjoyed it a lot.

Of course, Hulk is usually a terrible blockbuster. It’s slow-paced, and it seems endless when you still got a good 20min to go, but if you really sit down to watch it (and not just pass the time), you’d find that it shines the best when Lee’s not trying to make a superhero movie by focusing on the drama, making it the only origin story that would’ve actually been affecting if it hadn’t been an action movie. Though Nick Nolte is best at being the jackass of a father, it’s Paul Kersey’s scene playing the younger version of Nolte’s character that are etched on our memories, which also bring forth the best scenes for Bana. Seriously, one of my favorite scenes is the one where he sees himself as The Hulk in the mirror.

Now we’ve come to the CGI. I agree, The Hulk is too much of a tropical shade of green and sticks out like a sore thumb in the daylight… against some of the scenes in the Mojave Desert, in contrast to scenes like the one mentioned in the above paragraph… or especially Banner’s first transformation and first encounter with his father. But judging from the quality of renders, the visual effects -when it comes to The Hulk as a character- are quite good especially compared to many of the effects in the X-Men franchise, which at the time had released X2. They’re infinitely better than Spider-Man. However, it does stumble because you reach a point where the budget just isn’t cutting it- the mutated dogs and mutant poodle wasn’t one of my favorite things, but I’ll give the worst effect to the blob of blood coming out of Nolte’s hand. In fact, his last act was so unnecessary, it was stretching the whole movie at that point.

But, hey! A+ for effort! And A+ for making an origin story that could stand on its own.