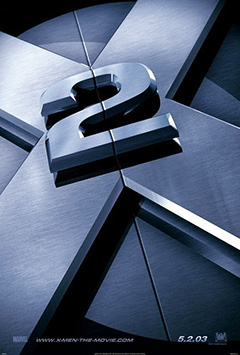 When did X2: X-Men United become a hated movie? Then again, who am I? The only person in the world that seemed to liked Ang Lee’s Hulk (don’t worry, that review is coming up as well). Just see how high up these movies are up my Thou Shalt Be my Hero list. Up until the day that I saw and sat at the edge of my seat while watching The Dark Knight, X2 sat comfortably in the top spot of my favorite superhero movies, and after these many years it’s still one of my favorites ever.

Dazed and confused about his past, Logan (Jackman) returns to see Professor Charles Xavier (Stewart) to see if he could sort his mind out and actually make him remember how he came to being. However, he couldn’t have better timing for it, as a mysterious teleporter has just attempted the United States’ President assassination and attempts to resurrect the Mutant Registration Act are being carried… under the shadow of Colonel William Stryker (Cox), who has been visiting Magneto (McKellen) in his plastic prison cell for a darker agenda.

While this one largely avoids that problem of introductory films that X-Men had, its only fault would be that it becomes -the original- Wolverine origin story (X-Men Origins: Wolverine is more like “the beginning,” no?). But what’s not to like? At that moment, Wolverine was (and still is) the biggest draw for the franchise with Hugh Jackman crossing the preferred demographics and becoming a household name. My mom knows him by name, that’s all he should care about. And while Stryker’s original comic-base shady Christian fundamentalism would’ve gone hand in hand with the LGBT undertones of “coming out” as a mutant, he’s turned into an army man because explosions would make for a far more exciting action film, that really reaches its most threatening point with the raid at the school because… the military raiding a seemingly harmless school in the middle of the night doesn’t mirror reality, amirite AMIRITE? You gotta love it when the soldier just tranquilizes the channel-flicking boy right in the neck.

Except for Mystique’s or Jean’s glowing eyes, visual effects and production values are better — which I suppose comes with the Fox budget increase after X-Men — with the coolest being Nightcrawler, of course. Besides Alan Cumming being awesome at everything he does, his detailed makeup is stellar and his marvelous White House attack sequence is already a classic one that still can’t be rivaled by the Quicksilver one [1]. Whooshes and fast-paced editing will always be more agile than slo-mo cameras. Plus, there’s super Mystique who can do everything from seducing, kick butt to hack computers and fly helicopters… her only fault really is that she’s too often not morphed into herself, which isn’t the case with Lawrence whom is being paid for her name. Even Kelly Hu with her minimal -single- line as Lady Deathstrike manages to be memorable… and sort of has her moment of warmth right when Wolverine does what he tends to do best- get them before they get you.

Though X2 is a good 30min. longer than the first one, it feels short to the amount of parallel arcs going on and suffering from a more subtle arc for Jean Grey (Janssen) and completely relegating Cyclops (Marsden) (and to an extent, Magneto) to the background. Famke will always be one of my favorites, but really, I can’t complain when all my attention is going to the other elements mentioned above. I’m also rather surprised neither of the following movies had been able to taint my enjoyment of this one.

Suck it, you haters. xD