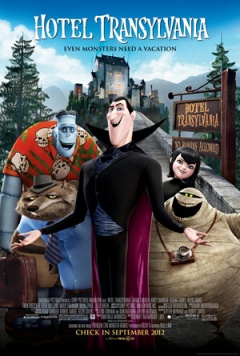 The things you do for your little relatives…

Okay, I might be the only person among the entire YAM Magazine team that has actually watched Hotel Transylvania on the big screen. And I didn’t want to talk about it until the Golden Globe voters somehow decided to criminally toss ParaNorman aside and nominate this film instead. Based on its animation alone, Hotel Transylvania delivers. And to my surprise, it isn’t the worst I’ve seen from 2012, considering the cast it boasts. Unfortunately, it isn’t exactly great to watch.

Hotel Transylvania stars Adam Sandler as Dracula, who is shown as a total control freak when it comes to administrating his five-star monster-friendly resort and the life of his daughter Mavis (Gomez), who just turned 118 years old and wants to explore the world against her father’s wishes. As Dracula makes preparations for his daughter’s birthday (against her wishes), things get out of control when Jonathan (Samberg), a human being, enters the hotel and forces Dracula to hide his identity at all costs. Worst of all for the Count, Mavis begins to fall in love with Jonathan, and that’s not something Dracula would approve of.

You can already see how it’s going to end, right?

Hotel Transylvania uses monsters, but it is pretty much a kid-friendly film in all of its aspects (unlike ParaNorman) with a “true love prevails” motto. Jokes and gags are hit and miss, but I can let that slide since I’m not part of the target audience. I’ll admit that I laughed at the scene in which Dracula feels disgusted after watching Twilight, or when the Wolfman (Buscemi) had a hard time dealing with his cubs.

The biggest problem with Hotel Transylvania lay in the screenwriting. Genndy Tartakovsky, who makes his debut as a film director, shouldn’t be blamed for all of the film’s errors as he was the sixth director brought into this Sony Animations project. But the screenwriting presents an uneven clash of things, such as how monsters and humans perceive each other, adapting “Adam Sandler and pals” material [see: typical Sandler comedy films] for younger audiences, the “overprotective father and daughter” storyline, the inevitable cliché romance storyline between Mavis and Jonathan that leads to a hokey ending, slapstick comedy, and more going on.

The characterization of the characters was acceptable, except for Samberg’s character that was irritating from the start. Sandler’s Dracula, along with his relationship with Mavis, worked well enough to carry the film. And despite the small amount of screentime, the Wolfman and Frankenstein (James) were fun to watch.

Overall, Hotel Transylvania is mostly a film that younger audiences will enjoy, but not so much for adults that might stumble upon the film under different circumstances.