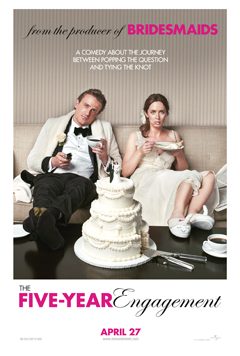 Let’s face it — the romantic comedies being released as of late have been nothing but stale retellings of the same old story, and that’s fine, but sometimes you need a little more substance. In comes Nicholas Stoller, director of the hilarious Forgetting Sarah Marshall, to shake things up with his latest feature, The Five-Year Engagement.

Tom and Violet are madly in love with each other. One year after meeting at a New Year’s Eve costume party, Tom finds himself proposing to Violet, who says yes. The wedding planning begins almost immediately, but what seems like a short engagement soon turns into a long and arduous process.

Tom sacrifices his successful career as a chef in San Francisco to move to Michigan for Violet to pursue psychology at the University of Michigan. What started as two years for Violet at the university soon becomes much longer, and Tom finds his happiness waning due to a lack of success in this new city. It is this five-year stretch that weighs heavily on their relationship, leaving Tom and Violet to wonder what will happen with their engagement.

The Five-Year Engagement doesn’t bring anything particularly new to the table, but it doesn’t have to. Segel and Stoller’s wonderful writing blends awkward comedy with the romance and melodrama necessary for the rom-com genre. Everyone in the cast seems to fall into uncomfortable situations, and while the sexually charged jokes and nudity almost seem out of place at times, Jason Segel’s ass is always a pleasure to look at.

Starting off slower than necessary, Five-Year takes a while to break into its stride. The first half of the film has its ups and downs and could have trimmed some of its two-hour length. The latter half is simply amusing as can be, and adds a tenderness and dramatic progression to its characters and their lives that many romantic comedies lack. Even at their lowest points, however, Stoller doesn’t allow his characters to become unlikeable people, giving these characters room to grow in scenes with and without each other.

The chemistry between Emily Blunt and Jason Segel is heartwarming and drives a lot of the movie. From the first few minutes, one feels comfortable with them, like an old friend hearing the story of how they met for the first time. Both actors give undeniably enjoyable performances, and it’s impressive to see Segel drift into darker territory than usual in this rom-com.

The supporting cast also provides an enormous chunk of the comedy, with two standing above the rest. Chris Pratt, of Parks and Recreation fame, delivers both crude humor and genuine silliness as Tom’s best friend Alex. Early in the film, he even takes to singing the Mexican song Cucurrucucú Paloma, which many may remember notably from Almodovar’s Talk to Her. Pratt, however entertaining, is outshined by one other: Alison Brie, who plays Violet’s sister Suzie.

Brie’s British accent is impressive, and especially entertaining for those who watch her frequently on Community and Mad Men, but it’s the way that she embraces her character that makes for a truly funny show. One scene in particular between Blunt and Brie, in which the two argue while doing the voices of certain beloved kids characters, is unlikely to be forgotten by any audience member.

The Five-Year Engagement may not be the romantic comedy that everyone wants to watch, but it is certainly a heartwarming movie that’s fairly realistic in comparison to other films in the genre.